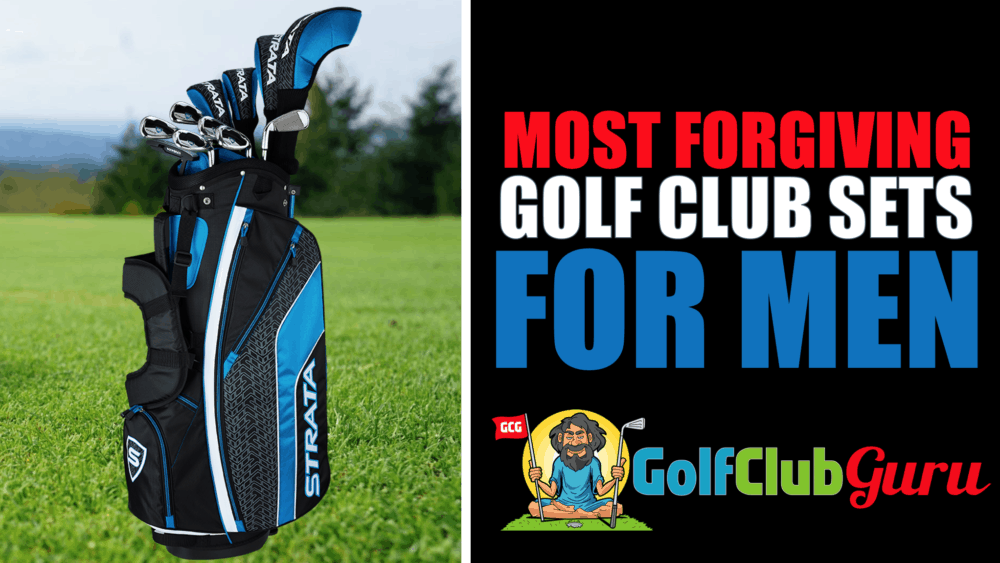 The Most Forgiving Complete Set of Golf Clubs for Men

Putting together your own set of clubs that can be a long and drawn out affair, and who has that time and patience in the first place? Instead, what we recommend is going for the perfect complete set from the outset. However, in this instance we are looking at the set having one particularly important aspect, that it’s very forgiving. Why? Well, it just allows you to focus on other parts of your game instead of worrying about striking the ball perfectly to avoid missing the fairway or green.

The Callaway Strata Ultimate set has to be one of the best out there on the market for new players or those struggling to get their handicap down, and it’s easy to see why. With this set, you get the driver, a 3 and 5 wood, two hybrids, irons through 6 to 9, a pitching wedge, a sand wedge, and a putter. Basically, everything you need is covered, and we do love the fact that they have the sand wedge included as this can often be missing from various sets.

If we look at the driver, then the first thing you notice is that it comes with a large face, so that alone makes it far more forgiving in nature. Moving to the irons, they come with steel shafts, but the best thing about them is the balance and weight distribution. They also include their patented high-flight technology, so you get that ball up off the ground a whole lot easier than before. Sure, the weight may not be so easily adjusted like it can be with more expensive clubs, but Callaway have sought to strike a real balance for the general player.

Overall, with Callaway you know exactly what you are going to get, and that’s why we love them. They have tried to open up the club face and increase the sweet spot resulting in that ball taking a more true line, and it does all of this without costing the earth.

We really do love Wilson clubs because they offer a real boost to the amateur or high-handicap player, and the Profile XD set is no different. With this, you get 10 clubs including driver, a 5 wood, hybrid, 6 through 9 irons, pitching wedge, sand wedge, and putter, so you are pretty much covered for every possibility.

If we look at the driver, then it has weighted technology, and the distribution of that weight is what helps when it comes to it being so forgiving. Also, it’s lightweight allowing you to boost your swing speed as it cuts through the air with minimal drag. So, expect more yardage without stressing about slicing or drawing the ball off the tee.

We also love the hybrid in this set as it includes their high launch technology, and that’s as good as it sounds. Basically, it helps you lift the ball off the ground from the fairway or light rough resulting in a cleaner strike which, when incorporated with the larger face and sweet spot, it does mean you can have faith in your shots and let go with them.

We could go on with this set as it really is that good. Even the putter is easier to align meaning you should have less missed putts, and all of this just adds up to a pretty cool set.

Now, the thought of getting a complete set could fill you with dread and the belief that it will cost a fortune, well that needn’t be the case. So, to show that, we recommend the Tour Edge Bazooka 360 complete set. Try to go back a few years in order to reduce the cost, and we feel that it’s going to be well worth it even though these clubs cost under $500 even when brand new.

This set comes in a standard length shaft, but the main point for us is that the club heads are oversized, and that is going to boost your confidence as it does mean the sweet spot is bigger than normal. Also, the irons in this set have a cavity back, and the weight is pushed to both the heel and toe. This is going to also make it easier to get the ball off the ground no matter your lie while that larger sweet spot does give that sense of the club being as forgiving as possible.

But then, there’s the driver and that can often be where people need the clubs to be as forgiving as possible. The driver has a 460cc head, but it also has a thinner face than usual on this set, and that’s important. The thin face, along with the weight distribution, allows for some corrections to be made with the off-center strikes. Basically, you can then focus on your swing and the motion instead of stressing about how you strike the ball.

Overall, it’s the balance of this set, the control it gives, and the way in which it helps you with your game that stands out. The fact you can get all of this for a few $100’s is seriously cool, and if you are on a budget, then this set could be perfect.

Getting a complete set that is kind on the forgiving side is easy as the sets mentioned above will show. However, it doesn’t have to cost a fortune either. We believe you will be more than happy with the sets that we have suggested.

The main things to look out for with a forgiving set is oversized heads, cavity backed irons, and the manufacturer stating that the sweet spot is larger than average. If you can get one that covers all of these bases, then you are surely onto a good thing.

So, what are your thoughts on the sets we have included? Do you feel that you need clubs to be more forgiving? Let us know in the comments below.