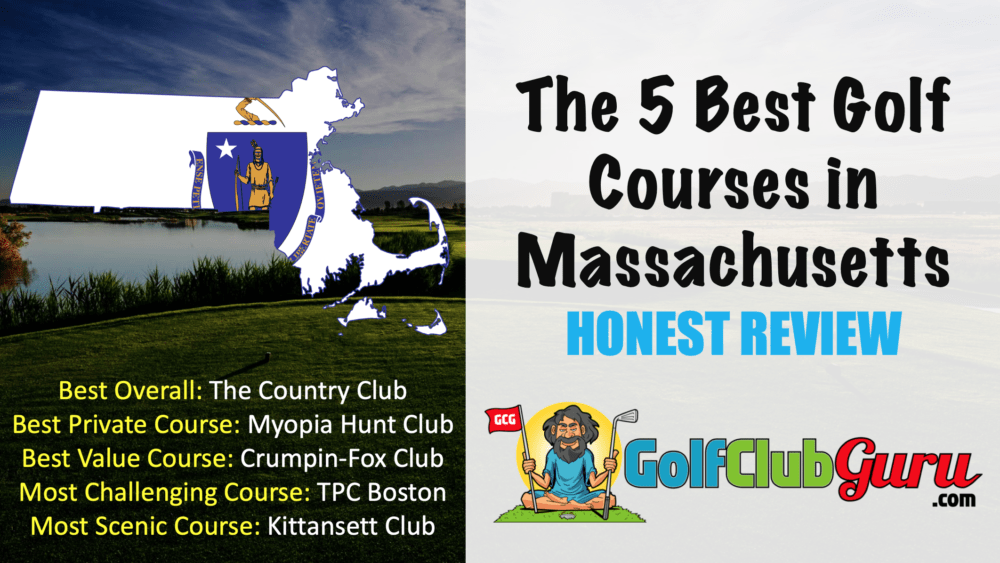 The Category-Winning Golf Courses in Massachusetts

What more is there to say that hasn’t already been said about The Country Club? I’ll save you the time of reading about Francis Ouimet’s improbable run at the 1913 US Open (there’s already a movie about that) and focus on what the club is today.

Unlike most private New England golf clubs, The Country Club is a 12-month a year facility. Besides 27 holes of championship caliber golfing holes, there is plenty more to do on the grounds. Members have access to indoor and outdoor tennis courts, a swimming pool and skeet shooting. Additionally, when weather and temperatures permit, outdoor skating and cross-country skiing is available.

When big tournaments come to town, as they so frequently do, golfers play a combination of the Clyde and Squirrel nines, as well as the Primrose Course. This layout will be used in 2022, when the fourth US Open at The Country Club is played. The Ryder Cup was hosted here in 1999, as well as numerous Men’s and Women’s US Amateur’s.

Enough about history, let’s talk the course. The greens are small, often elevated and surrounded by sand traps. Fescue, bunkers and small mounds line the fairways, spelling trouble for anyone having a “wild” day off the tee. As one would guess about a country club of this prestige, the conditions and atmosphere are top of the line.

To give you an idea of the exclusivity of the Country Club, even Tom Brady had to spend time on their waiting list. For Massachusetts, that’s like making the Pope wait in the Vatican. No word on if he’s maintained membership after the move to Tampa.

Myopia Hunt may have hit its peak of notoriety in the early 20th century when it hosted the US Open four times in the span of eleven years. Despite its early rise and not hosting a US Open in over a hundred years, it remains an elite private course. Furthering its prominence in modern golf, it is consistently ranked among the top 100 US courses.

The first nine holes at Myopia Hunt were built in 1882, with another nine added late in 1898. Since the second nine was not finished for the 1898 US Open, the existing nine holes were played eight times.

In recent years, many trees have been taken down around the course, replaced by mounds. By swapping one obstacle with another, Myopia Hunt restored some of the courses original vision without sacrificing difficulty. At just over 6,500 yards, the course relies on exceptionally placed bunkers, fast greens and natural elevation changes to challenge golfers.

One thing that is obvious when walking around Myopia Hunt is its age. Once you emerge from the wooded driveway, you’re greeted by an 18th century farmhouse that serves as the clubhouse. Though pretty nondescript from the outside, the interior showcases the club’s storied past. Besides golf, polo has also been played at Myopia Hunt for over 100 years.

Finding an affordable and challenging public course is not always easy. Finding one that’s in as good of shape as the Crumpin-Fox Club is even harder.

Bending fairways and greens protected by water are among the most talked about aspects of Crumpin-Fox. If you’re someone that has trouble controlling the driver, you might consider leaving it in the bag and hitting woods or irons off the tee.

Approach shots also play a key role at Crumpin-Fox as the greens are large, but are often multi-tiered and have large breaks. Due to the possible length of first putts, beating your opponent to the green hardly assures victory on the hole.

On any given day at Crumpin-Fox, you can find golfers of all ages enjoying the course. You also have access to a driving range, putting green and short game area. With tees ranging from 5,400 to 7,000 yards, Crumpin-Fox is a great place to learn the game, refine your skills or enjoy a day out of the house.

Having hosted 15 PGA tournaments and the site of the 2020 Northern Trust, TPC Boston plays difficult for even the world’s top players. From the back tees, TPC Boston stretches over 7,200 yards and has a monster 77.2 rating. Even the White tees, three sets in front of the tips, have a rating of 73.3.

For a lot of rounds, the finishing hole is make or break. The 18th at TPC Boston is a 500+ yard par 5. The tee shot is pretty run of the mill, but difficulty increases with each advance. A bunker in the middle of the fairway threatens what should be a quality lay up. Those who do not lay up flirt with a water hazard that crosses the fairway.  The green was renovated between 2011 and 2012, reducing the green’s size and increasing its elevation.

As a member of the TPC network operated by the PGA Tour, conditions are consistent throughout the playing season. From a difficulty perspective, this means that greens always roll fast and true. Obviously, the course is set up to be more difficult when the tour comes to town, but a lack of experience on greens like this will lead to more three putts than the average golfer is used to on any given day.

Kittansett translates to “by the sea,” a simple, yet complete way to describe the club. Recent restoration efforts removed hundreds of trees, opening up the course and providing a better view of the Atlantic Ocean. These views and tough, but fair condition have helped land the Kittansett Club on about every top 100 list there is.

Kittansett is not a course that flies by on its looks alone. It hosted the 1953 Walker Cup and various other top amateur tournaments over the years. In 2022, it will play host to the US Senior Amateur.

The tree removal process has made Kittansett more of a links course than any other time in its history. Greens here are firm and fast. Among the more unique holes, 3 green is entirely surrounded by sand.

On the drive into Kittansett, one side of the road lets you bask in the beauty of Cape Cod and Buzzards Bay. The other gives you a peak at about a third of the holes you’re playing that day. With strong winds and mounding along fairways that can knock your ball sideways, most golfers get to see plenty of the beautiful Kittansett Club during each round.