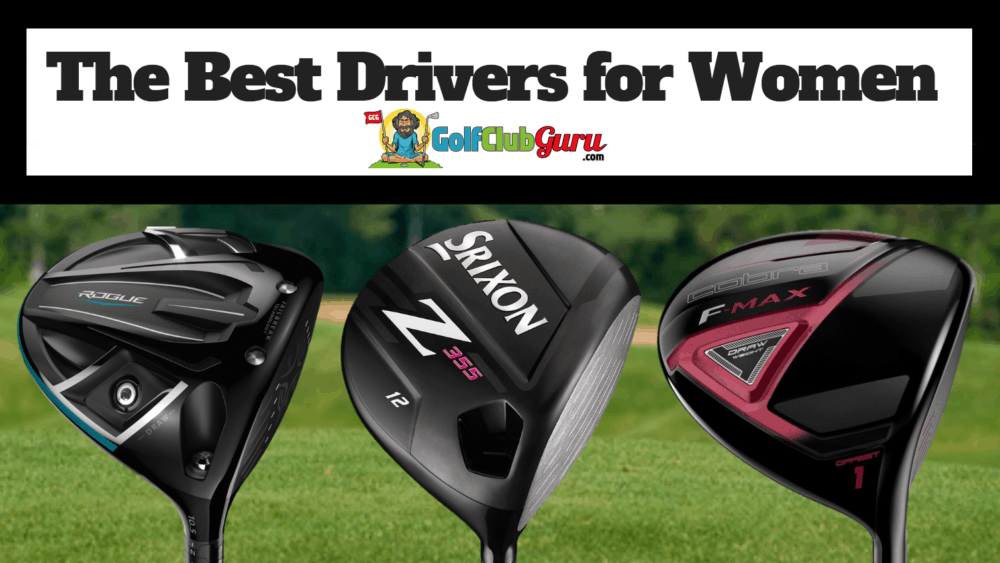 The Best Women’s Drivers on the Market

Women’s drivers are not made the same as men’s. The shafts (which are lighter) have more flex to them, and the club heads are often times a tad lighter as well. Besides that, they are all made relatively the same. The weight is placed in the same spots, the club faces are made to be thinner to make the ball pop off as fast as possible. They are designed to be as low spin as possible, so that slices/hooks are less likely to be so punishable. The club heads are typically oversized, because the extra forgiveness will allow your mishits to still fly pretty far and straight.

Short answer: so that you can develop more club head speed.

Note: all links/photos that you click on will take you to the available eBay listings for the drivers.

Cheapest Women’s Driver That I Would Recommend: Srixon Z355

If you want to save a lot of money but still buy a decent driver, the Srixon Z355 driver is the one for you! It’s got a super forgiving, oversized head. It feels pretty solid at impact, which is always a plus, especially considering that most women’s drivers have a loud, “tink” sound to them that is not super pleasant.

This driver has a loft of 15 degrees (called the HL or high launch option), and it also has an option for 12 degrees. You might be used to playing a lower lofted driver than 15 degrees, but let me tell you why this is probably a better suited club for you. The less loft that a club has, the harder it is to hit straight. That’s one reason why a 9 iron is much easier to hit straight than a 4 iron. So unless you are just launching the ball way too high with your current driver, this is going to be a much easier driver to hit how you want to. Golf is supposed to be fun, but it’s hard to have fun when you are hitting a bunch of low, inconsistent drives that curve left and right.  So, because this driver has so much loft, I would recommend it for anyone starting out or to anyone that is currently struggling with hitting their driver with any sort of consistency.

Compared to the other women’s drivers, this is BY FAR the lowest priced. Don’t think that means it’s a low quality driver though. Srixon, although one of the most underrated companies in the US, is a super popular company worldwide. They produce top quality equipment every year, and this is simply a driver that has been on the market for a few years.

The Srixon Z-355 driver is adjustable, which I typically don’t recommend for newer golfers. However, as you improve and take some lessons, you and your coach might decide that you should slightly change one of the variables of the club: the loft, the lie, and the face angle.

Here’s a brief layout of why this driver is tough to beat:

If you want the best bang for your buck, the Cobra F-Max driver is going to be your best option. It’s the perfect mix between price and performance. That means that it will perform better than the Srixon driver (longer, slightly better feel, tad more forgiving) but it will come at a slightly steeper price.

Like Srixon, Cobra is up there with the most underrated golf club companies in the world, especially when it comes to women’s clubs. The F-Max driver feels great, looks great, and performs great. What more could you ask for?

Here are my favorite things about it: 15 degrees of loft (same as Srixon driver above) and an additional weight near the heel of the club. The 15 degrees of loft is great for consistency and less sidespin on your shots. The weight on the heel of the club, called the “draw weight” will make it much easier to come into impact with a square club face. Most golfers come into the ball with an open club face, but this weight will make it easier to naturally close the face. As a result, it will actually encourage you to hit a draw, not a slice. The more weight that a club has on the toe, the more you have to actively turn the face over to close it. The more weight is on the heel, the less you have to think about and do to close the club face.

If you can afford the cream of the crop, you might as well get it, right? The Callaway Rogue Ladies Driver is the absolute best driver for ladies… without a doubt! The new jailbreak technology makes this driver both the longest and the most forgiving driver that you can buy today.

What is the jailbreak technology? Is it just a marketing scheme or fad? Nope.

The jailbreak technology puts two solid rods behind the club face. They are made of light weight but strong material that greatly improve the ball speeds of your drives. On top of that, they provide more weight around a wider part of the club face, leading to longer, straighter off center hits (which are bound to happen anyway). As long as you hit the ball somewhere inside the two or near one of the bars, you can rest assured that the ball will fly with the most speed possible.

I would strongly recommend that you get the 13.5 degree version, as it will improve your launch angles and the decrease the amount of spin you put on the ball. Pairing the 13.5 degree loft with the Boeing designed aerodynamics, this will for sure be the longest driver that you have ever hit before. Plus, the Callaway Rogue driver has a premium shaft in it that only weighs 40g, making sure that you can create the most speed possible.

Why it’s the best of the best: