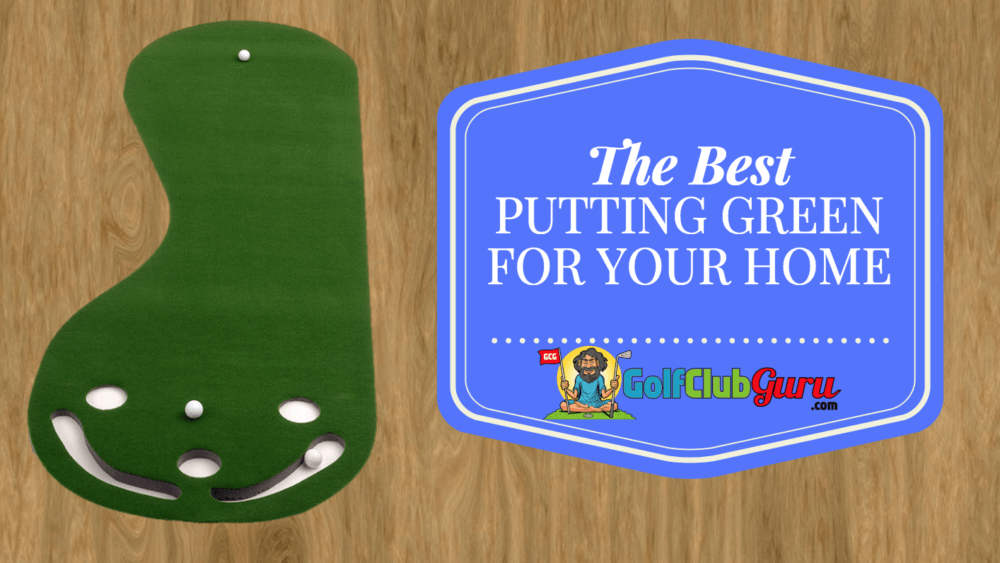 The Best Putting Greens & Mats for Your Home

Can’t get enough of golf? Suck at putting? Either way, practice putting greens are my all time favorite accessory for addicted golfers.

An entire hitting mat and a net can take up a lot of room. Many ceilings aren’t even tall enough for a full swing, so often times they are not even a possibility.

A little putting green/mat though? Hardly takes up any room. Very easy to disassemble or push under the bed and out of the way.

Anyone that sees it is going to want to try it out. Heck, my roommates and I used to have super long and intense putting competitions all the time! There was hardly ever a time where we walked past the mat and didn’t hit a few putts.

Fun aside, my putting seriously got a lot better as a result of practicing so often. My stroke just felt more solid, and I had much better aim and speed control.

Let’s talk about which putting mat/green to buy, though. Everyone knows about the one foot wide, narrow putting mat that “sends the ball back to you” (apparently), even though it never works and doesn’t offer any kind of creativity.

For that reason, the standard putting mat didn’t even make the list.

However, there are four that I would highly recommend, depending on your budget and what catches your eye the most.

Oh, and you may also be interested in pairing your putting green with some of the best putting training aids.

If you don’t want to spend much more than $10, Upstreet putting holes are the ones for you. As long as you have a carpet, these work perfectly. They offer a ton of versatility, while still giving you the benefit of having an actual hole to be hitting into.

Don’t worry if your carpet isn’t perfectly level, as many aren’t. Real greens aren’t level anyway, and you can eventually learn which way the ball tends to curve on your carpet after a while.

These holes offer a ton of different possibilities. They are obviously very easy to move and mix up, so it gives you tons of different putt opportunities.

I have never owned these before, but the reviews show that, overall, they work very well. The leading edge is extremely small, so the ball won’t jump or be effected much when heading towards the hole.

As long as you know that they will only be useful on a carpet, and preferably a very thin carpet, then you will be very pleased.

I give it a lot of credit when it came to my quickly improved putting. Aside from that, though, my friends and I just had a TON of fun on it. We played games of “horse,” like the basketball game. We called every shot and incorporated a lot of trick shots and weird angles.

When it came to serious competitions, we would see how many we could make in a row. We’d put a few dollars on each putt at times, and man were our hands shaking.

Alright, enough about my fun times in high school and college. Let’s get to the actual putting green.

It measures 3 by 9 feet, so it offers a good bit when it comes to distance. I have practiced everything from one footers to 20 footers far behind the putting green just for fun 🙂

Overall, my favorite part was that there are three holes. We really liked having lots of different putt opportunities, as opposed to most putting mats which just have one, straightforward hole. That’s not how real putting is, so I was never a big fan of those. They were too boring.

The putts roll incredibly smooth on the Putt-A-Bout green. It was very easy to straighten out the green when it got sideways at times. And there were hardly ever any creases, only when we left a leg of a couch on it for a while on accident. However, we just placed some heavy books on the crease for a day and it was good as new.

I would highly recommend this green if you are planning to put it on a wood floor or even a firm carpet floor. I wouldn’t be so sure about a soft carpet floor though, as it might not roll as true due to the softness.

Alright, I know I’ve been bashing on those typical putting greens that are like a foot wide and 8 feet long in this article. Truth is, though, there is one that I’ve always had my eye on, that is the Wincan putting green with the sold white line leading to a narrow hole.

The only benefit is that it has one solid line going down the entire right side of it. I think this is an exceptional visual for you to learn what a straight line looks like when you are over the ball.

So many people, myself included, see one line while behind the ball, and a completely different line when over the ball and about to putt. This can lead to some huge misses, even with the perfect putting stroke. So if you tend to always miss one way or the other, this will be a great tool for you to get used to seeing a perfectly straight lined putt.

The other benefit is that, after training with the straight line, you can put it to the test by moving over to the left and hitting putts without the solid white line.

Best All Around Putting Green: BirdieBall

There is no question about it, if you are searching for the best putting green to put inside a house, BirdieBall has the best ones.

The fabric is incredible, it rolls just like a perfect green. They have tons of different options when it comes to sizes, number of holes, designs, borders, etc. I think it’s pretty awesome that it is a family run business as well.

When I am older and making a little more money, I am for sure going to invest in a large BirdieBall putting green, but I can’t afford one at the moment.

Based on all of the videos and reviews that I have seen, they are very simple to setup and there seems to be no problems at all except for the pretty steep price.

However, it is very understandable, as no other company makes such a high quality green that you can use indoors.

Family and friends are always going to have a great time on it, and it is a great way to improve your putting stroke, which so many of us need to work on.