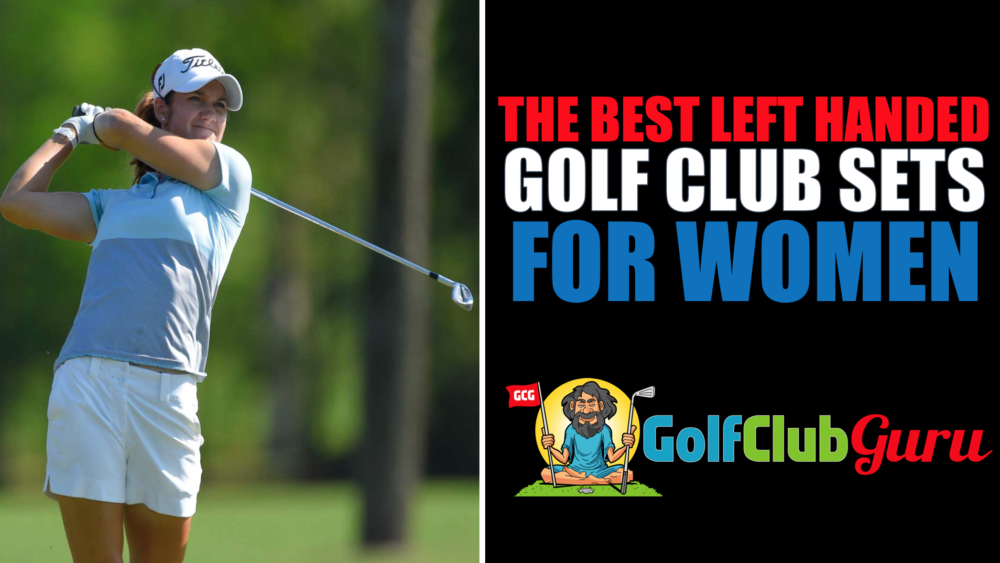 So what can we do about it? Not much, unfortunately. This article is going to focus on the highest quality, best performing left handed sets for female golfers. Although there aren’t tons of options, the choices are pretty clear.

We’ll boil it down to your budget, as most golfers want the best bang for their budget.

I’ll make this as straight forward as possible. The TaylorMade Kalea set is the best set of left handed golf clubs that women can buy. The Kalea clubs are FAR better quality than the other three sets that we’ll talk about in this article.

They are still difficult to find in left handed, but they are out there. Other high quality sets, like the Callaway Solaire set of women’s clubs, aren’t currently offered in the left handed variation.

Pricewise, the TaylorMade Kalea complete set will set you back around $1,200. That may sound like a lot to you. If golf is going to be a big hobby of yours, then the price will be worth it. If you don’t think you’ll play more than a few times a year, then it’s hardly worth spending this much to be honest.

These clubs will WITHOUT A DOUBT be the best performers in women’s golf club sets. Super long, super forgiving, super durable, great look, and great feel. You truly can’t ask for anything more than that. Cheaper sets will hit the ball shorter, more offline on mishits, break quicker, and feel bad at impact.

Pros: Highest quality of the four sets in this article by far. Includes 2 hybrids and 2 fairway woods, which is uncommon and a huge help for most women golfers who don’t hit the ball as far as they’d like.
Cons: Much higher price tag than the other 3 sets.
Who It’s Best For: Women golfers that want the highest quality left handed set on the market, no matter the price. If budget isn’t a huge concern, this is the set for you.

Most golfers don’t have $1,000+ to spend on clubs. If that’s the case, you’ll probably lean towards a set like Wilson Profile SGI women’s set. It’s a great performing set at a great price.

Will they perform just as well as the TaylorMade Kalea clubs? Absolutely not. The Wilson Profile SGI clubs will be shorter, less forgiving, and feel worse at impact. Plus, these clubs will break faster, as they are made with lower quality material.

Wilson is known for great value sets, and this one isn’t an exception. This is a great value set, but not the best performing set. Truthfully, if you are focused on the best value overall, then this isn’t the one. The Wilson Profile SGI set will perform better than the Strata and Topflite sets, but NOT BY MUCH. The Strata and Topflite clubs offer the most bang for your buck, in my opinion.

The Wilson Profile SGI women’s set includes: driver, fairway wood, hybrid, 5 irons, wedge, and a putter. The set can be bought with either a cart bag OR a stand bag, which is pretty cool. Most sets don’t give you that option.

This set can normally be purchased in petite (small), standard, or tall sizes. However, only the standard size comes in left handed, so you unfortunately don’t have those options if you are a lefty.

Pros: Great performing set for a fair price. Higher quality clubs than Strata and Topflite.
Cons: Still relatively expensive. Not the best bang for your buck in my opinion. Still far lower quality than TaylorMade Kalea.
Who It’s Best For: Women golfers that want the best left handed clubs that $400 can buy.

Strata complete sets are BY FAR the most popular sets ever made. They sell more women’s complete sets than all of the others combined. Thankfully, all Strata sets come with left handed options.

The Strata Women’s 11 Piece set is the basic set. It’s got everything you need, and nothing that you don’t. I wouldn’t recommend the more expensive Strata sets, because the price difference is pretty significant and you don’t need the extra clubs.

I’ve hit the men’s version of these clubs, which are practically the same as this set. The clubs will be perfect for a beginner. Full disclosure, though: intermediate golfers will not like this set. Therefore, this isn’t a set that you can grow into. If you improve quickly, then you’ll want to buy a better set pretty quickly.

Beginners won’t be able to notice the weaknesses of these clubs. For example, these clubs feel terrible at impact, but brand new golfers don’t have anything to compare them to, so they won’t even notice.

If you expect to only play a few rounds of golf each year, this will be a great set. If you think you’ll play more than that, then I’d suggest spending more money NOW instead of later.

The Strata 11 Piece set includes a driver, fairway wood, hybrid, 2 irons, wedge, and a putter. That doesn’t sound like many clubs, but it’s plenty for a beginner. This set typically sells for around $250, but it’s actually close to $200 at the time of the writing (currently on sale).

Pros: Great bang for your buck. Has everything you need in one purchase to get started.
Cons: Cheaply made clubs which are great for beginners, but you’ll need to upgrade from relatively quickly when you improve.
Who It’s Best For: Women golfers that are overwhelmed by the golf set buying process. This is the most popular set ever sold, especially for left handed women golfers, and for good reason. Great all around set of clubs for the price.

If you only have $200, then you can still get a relatively good set of left handed, women’s golf clubs. The Top Flite XL 12 piece women’s set is a great option if you want the best clubs for your hard earned money. Oh, and guess what… you can probably pick up this set of clubs TODAY and start playing.

While the first three sets were all online only prices, the Top Flite XL 12 Piece set is only available at local sporting good stores like Dick’s and Academy. While 2-day shipping is super convenient, sometimes you just want to go pick it up and start playing right away.

The Top Flite set includes a driver, fairway wood, hybrid, 4 irons, wedge, and a putter. The clubs and bag comes in two colors: aqua and grey. Thankfully both colors are offered in left handed as well.

Pros: The BEST bang for your buck, in my opinion. Best combination of price and performance. Offered in two great looking color combinations. Can be picked up today in person at your local sporting goods store.
Cons: Not the highest quality clubs in the world, but that’s to be expected at this price.
Who It’s Best For: Women golfers that don’t want to shell out too much money for their first set of left handed golf clubs.