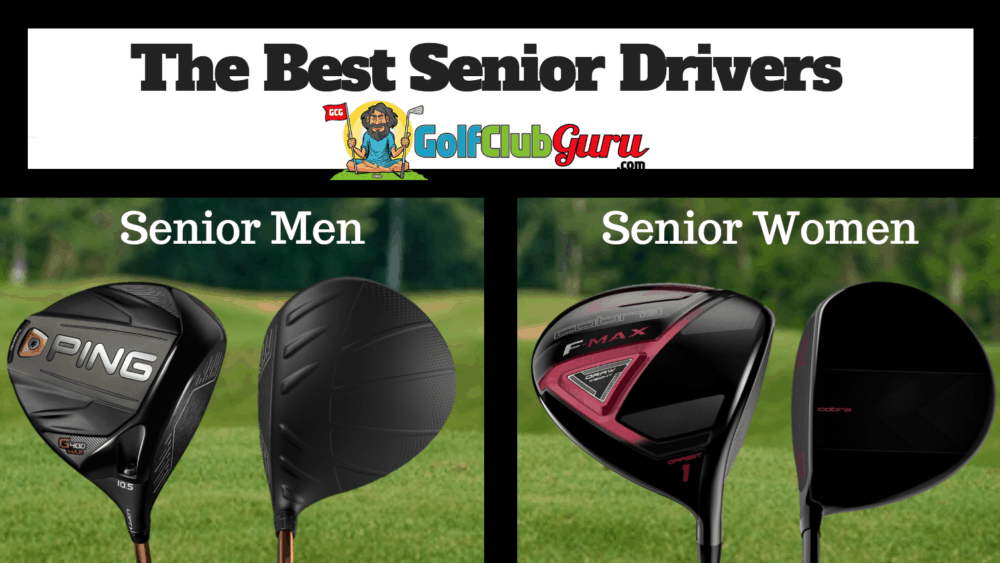 The Best Driver for Seniors (50+ and Slower Swing Speeds)

Drivers are not all made alike. The ideal driver for a younger man with a 100 mph swing speed is going to be different than one for a senior with a 60 mph swing speed. For that reason, I’d encourage you to find the best driver for you… one that will allow you to hit it as straight AND far as possible.

Please note that all links/pictures (if you click on them) will take you to the respective eBay listings.

So how are drivers for seniors different than regular drivers?

So now that we know what you should be looking for in a senior driver, let’s start talking about the best ones that you can buy today! I’ll split this article up into many different sections. Hopefully one of these sections will stick out to you as the most important factor in choosing a driver.

Here are some more guides for senior golfers if you are interested!

The latest Ping driver releases have been incredible popular. Seniors looking for the most forgiveness in a driver shouldn’t look past the Ping G400 Max Driver, the brand’s most forgiving driver of all time

This driver is perfect for seniors looking for the best combination of distance, stability, and forgiveness. The highest total MOI (moment of inertia) in a PING driver results in high flying, super long drives. The tungsten weighting and denser back weight, including a 460cc (oversized) design, result in more forgiveness than in previous models.

They claim to have designed the lowest center of gravity (CoG) driver of all time as well, which is a huge factor in how forgiving a driver is. The lower the CoG, the higher the launch angles. And the higher the launch angles, the less side spin that is put on the ball and the tighter dispersion of shots as a result. I got the chance to hit this driver at a demo day and was blown away at how forgiving the club was. Off center strikes won’t feel as great, but they will still perform well. I didn’t feel like I lost much distance on my mishits, which is a huge benefit when hitting a driver.

If you decide that forgiveness is the most important factor to you, I would recommend you pick up the Ping G400 Max with 10.5 degrees of loft and with a senior flex shaft. This driver launches the ball at a very high angle already, so you should be fine with the 10.5 degrees of loft at slower swing speeds.

So if you’d rather hit a few more fairways as opposed to hit it 10 yards longer, this is the driver for you. If you’d rather have the 10 yards though, check out the Callaway Rogue Driver.

Why the Ping G400 Max driver is the most forgiving for seniors:

Many golfers, maybe even a MAJORITY of senior golfers, simply want to hit the ball longer. They probably remember the time when they could hit it 250 yards+, and they want to come as close to they can to doing it again. If that sounds like you, check out the Callaway Rogue driver. Although I think this driver is a tad bit less forgiving than the Ping G400 Max, it is a good bit longer off the tee. I also want to note that this driver is also still VERY forgiving, as most modern drivers are. That’s not the main focus, though.

With the improved (lighter) jailbreak technology, Callaway has made the Rogue a tad bit longer off the tee than the Epic driver. It launches the ball higher and longer than any driver on the market today. The two solid bars behind the club head increase the ball speeds and forgiveness across the entire club face, which is huge, especially for seniors! I felt like my mishits literally didn’t lose any distance at all when I demoed the club at Dicks Sporting Goods. I compared it to my current driver (Titleist 910), and I gained above 12 yards on average.

If I had the money, I would pick this driver up in a heartbeat. However, it’s a good bit out of my budget. For that reason, check the next section if you are interested in a more budget friendly senior driver.

If you do decide on this driver, stick with 13.5 degrees (10.5 if you already hit the ball pretty high) and a shaft that weights 50g or less (60g if you are a strong senior with a faster swing speed for your age).

Why the Callaway Rogue driver is the longest driver for seniors:

The first two drivers that I mentioned, depending on when you are reading this article, could be easily $350+. If you are looking to save some money and buy a more budget friendly driver, check out the Cleveland Launcher HB driver. HB stands for Hi-Bore, so you know this driver is designed to launch the ball at super high angles with less spin. Cleveland has always been a great value option for drivers, as they are a bit of an underdog in the driver market. They can’t justify charging $500 for a driver like the other companies can.

I think it’s fair to say that this is Cleveland’s longest and most forgiving driver that they have ever released. They moved the weighting as low and back as possible, resulting in higher launch, lower spin, and more forgiveness overall. They also moved weight from the hosel (that used to be a tad bit heavy) to low and back, further increasing the amount of weight behind the face for more forgiveness across the entire face.

Distance wise, it is about as far as the Ping G400 Max, which is still impressive. Their “Launcher Cup Face” increases ball speeds, as they made the club face much thinner and faster. Overall, this is most likely the driver that I would buy if I were a senior. It’s the perfect mix between price and performance, which is exactly what I look for in a golf club. I would buy the 12 degree driver with a senior flex if I were in your shoes.

Here’s why the Cleveland Launcher HB is the best value driver for seniors:

Women’s drivers are different than men’s drivers. They are even lighter to allow you to create as much swing speed as possible. My best pick, and one of the highest reviewed drivers at the time of writing, is the Cobra Women’s F-Max Offset driver. When it comes to price, distance, and forgiveness, this is the perfect combo for senior ladies.

The offset will allow you to more easily square the face at impact, a problem than many senior women have. It’s a super light club head and stock shaft, so you should be able to create as much club head speed as possible. The driver has a bit of a draw-bias, so it’s perfect for those that struggle with slicing or missing to the right (for right handers). The fixed back weight near the heel makes it much easier to turn the face over naturally, so you won’t have to physically turn the club over as much to hit straight shots.

When it comes to forgiveness, this is also a great driver. The forged face improves ball speeds (and therefore distance) on mishits. Plus, the lower COG will take some side spin off the ball and result in straighter driver. Lastly, the 15 degrees of loft will be much easier to hit than one with less loft.  Overall, senior women can’t go wrong with this driver.

Why the Cobra F-Max Offset is the best senior women driver: