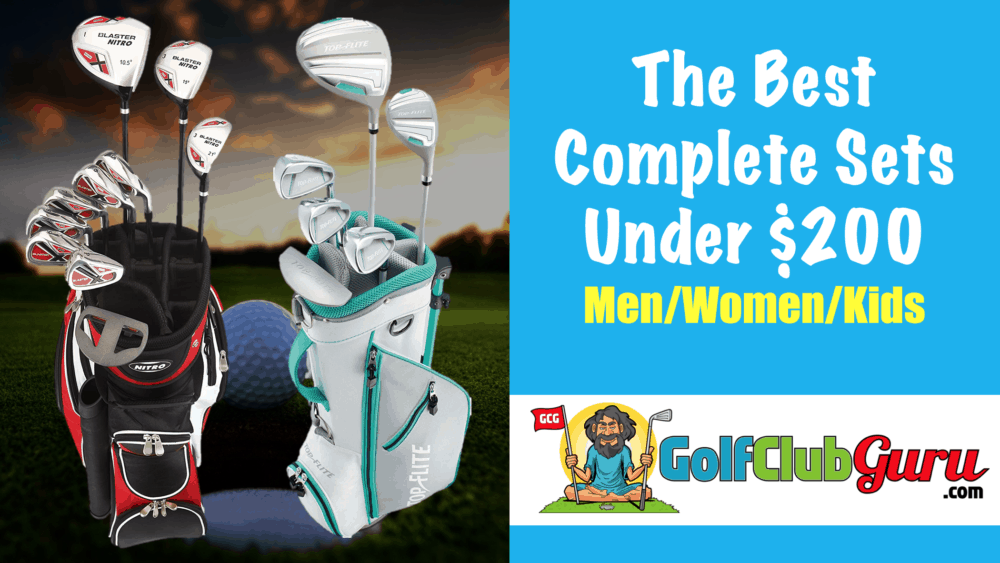 Listen, golf CAN be expensive. No question about it. But it doesn’t have to be.

If you have $200 to spend, you can get a complete set of golf clubs that isn’t complete junk. Will it perform just as well as the latest Titleist/Callaway/TaylorMade clubs? No, of course not. But, it will last you a long time and perform relatively well… all at a fraction of the price.

These complete sets are great for the following types of people:

Without further adieu, let’s get to the set of clubs. This article will be broken up into three different categories: men, women, and kids.

The Best Golf Clubs for Men Under $200: Nitro Men’s Blaster

Ever played with a Nitro golf ball before? It’s like the lowest prices golf ball that isn’t COMPLETE junk. Well, the Nitro Blaster men’s complete golf club set is the same way. It’s not the best performing set of clubs, but man the price is just hard to beat. It’s the only sub-$200 set of clubs that I’d ever recommend when buying new. Remember: you can always buy a slightly used set locally. Don’t feel like you HAVE to buy a new set of clubs.

Here’s what this set includes: Bag, driver, fairway wood, hybrid, 3 headcovers, 5-PW irons, and a putter. What does the set NOT include? Well, a sand wedge and a lob wedge. However, these are not 100% necessary. If you wanted to, you can just buy a couple cheap ones to fill the bag.

I really like this set for a few reasons. Firstly, the putter is a mallet, which most golfers find to be easier to align and easier to get the ball started on the right path. Secondly, the overall appearance is pretty attractive. Not too many colors, and doesn’t scream “CHEAP”. Thirdly, the bag is a lightweight carry bag, so it’s easy to move around (if walking) or could also be strapped into a cart (if riding).

Some golfers have said that the driver head falls off if hit against the ground. Firstly, the driver SHOULDN’T be hitting the ground in the first place. However, if it does happen, it seems that Nitro has been replacing club heads at some cost if you just reach out to them.

I’m a guy. Therefore, I’m not a women. Funny how that works. However, I have a good eye for researching golf clubs and understanding what is and what isn’t important in the selection process. After lots of research, the women’s Nitro Blaster 15-piece set is also the best selection for females looking to stay under $200. The brand “Precise” was a close second, but they have slightly lower reviews and slightly higher prices (a little over $200 after shipping).

With 100+ reviews with an average of around 4.5 stars, it’s hard to go wrong here. Club sets that are 3-4x more expensive have lower ratings, so it’s no doubt a great value option.

Again, Nitro is not a premium brand – so don’t expect a premium set of clubs. The clubs will perform well, especially for beginners, but experienced golfers are not going to use this set of clubs.

Just like the mens’ set, the Nitro Blaster set includes: Bag, driver, fairway wood, hybrid, 3 headcovers, 5-PW irons, and a putter. There are not lob or sand wedges includes. Therefore, I’d recommend picking up one cheap Wilson Harmonized wedge to fill the gap with shots around the greens.

The Best Golf Clubs for Kids/Children Under $200

Kids don’t need tons of golf clubs. Their 5 iron is only going to go a LITTLE bit further than their 6 iron. Practically the same distance. Therefore, kids’ golf sets have far less clubs. That’s great for the price, as there are lots of options under $200. When looking to buy a great value set of clubs, it’s hard to get away from Wilson and Top Flite. They have produced some of the most popular full sets for the last 5 years, and they don’t advertise much – so their prices don’t have to include marketing costs.

For boys, go with the Wilson Golf Profile JGI Junior Complete Golf Set. It’s super cool looking, really well made, and any boy is sure to love it. Plus, it’s only around $150. Introducing golf to a kid can be difficult. This set will make it very likely that they will at least be INTERESTED in the sport. Give them a boring looking set, and the same can’t be said. This set won’t fit every golfer, but the point remains the same. Stick with Wilson and Top Flite kid’s sets. They are easily the best value option.

For girls, go with the Top Flite Junior Girl’s Complete Set. It’s a very pretty set that I’m sure 99% of girls will love. Buy them a matching outfit and they’ll be psyched to hit the course. It includes a driver, a hybrid, two headcovers, three irons, and a putter. That’s all that is needed for girls (and boys) – trust me.