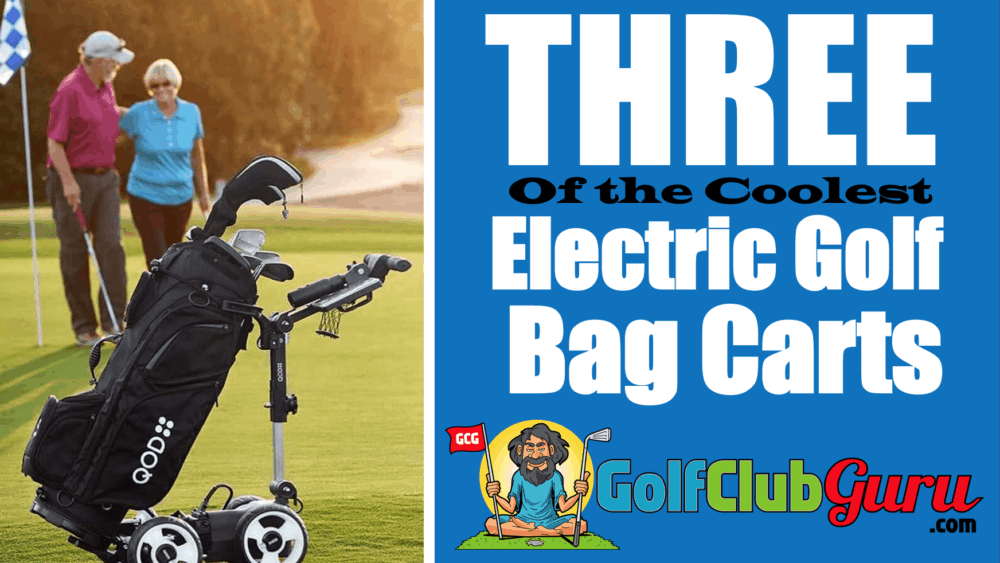 OK, so let’s be honest here. Robotic golf cart bags have been cool for what feels like decades, and they still are. We can see this by the way in which companies still produce them, and they still sell. However, there’s a problem. With so many out there on the market, and often at some pretty high prices, choosing the right one for you isn’t the easiest thing around. So, allow us to go ahead and make life easier.

Fun little backstory: I played at Bobby Jones Golf Course in Atlanta about a month ago (September 2020). It was a BLAST using their robot carts that followed you around with the remote on your belt…. until mine ended up in the lake and allowed my phone to fall out, never to be found again. I’ve got a great memory with my brother though, who seemingly did nothing at all to help, allowing the cart to pass right by him while we were looking for his ball in the water. Still love ya brother!

Alright, let’s get to it. We are going to talk about two different models. One for higher budgets, and one for those ON a budget.

Compared to a normal cart, electronic golf cart bags save you energy. They don’t necessarily save you any stress, though.

Electronic golf cart bags are a novelty. They are super fun to use, and they allow you to feel like a pro in a way, able to walk the course without carrying or pushing your bag around. That’s not to say they are perfect, as not piece of electronics really is. However, they are a great talking point with other golfers, and super convenient if you can afford it.

First, let’s explain one or two things about robotic golf cart bags. They are NOT capable of completely removing any stress associated with getting your golf bag around the course. They are practical, convenient and easy to use, but you will still have to keep an eye out on them, especially around steep hills and all hazards.

However, technology has definitely come a long way. It used to be that these robotic golf cart bags were cumbersome and difficult to move around. Now, they can practically navigate the course on their own with you simply setting them into motion by the click of a button.

However, to really stress the difference, we need to look at our two examples to show you what they are really capable of doing.

To kick things off, we have the MGI Zip Navigator. If you have $1,600 that you are willing to spend, this is the one for you. Highly reviewed, great appearance, & super easy to use. What more could you ask for?

This is a lightweight golf trolley, so even lifting it in and out of your vehicle as you get to the course isn’t going to be an issue.

But first, let’s clear up one concern that people often have about their robotic golf trolley, the battery. This version comes with 24V 380Wh Lithium Polymer batteries, and the good news is that it’s going to be good for two complete rounds on the one charge. Also, if you are worried about the power, then don’t be as it has a 200W motor, so getting up any slope on a golf course is going to not be a problem. Oh, and it’s also pretty silent which is another added bonus.

It’s also operated via remote control, and there’s a reasonable range when it comes to being able to operate it. If you are worried about it being unable to cope with undulations on the course, then it does have a stabilizer wheel that should be capable of counteracting that as best as possible.

Adding in more about the control, it has variable speeds, and while it’s not going to whizz along like an Olympic sprinter, it won’t drive you insane waiting on it catching up with you either.

Now onto storage and that too won’t be a problem as this golf trolley can collapse down to pretty much nothing. It also just weighs a total of 28.6 lbs, so it’s not going to be too heavy or cumbersome getting it in and out of your vehicle.

Overall, we love this model because of the ease of operation. It’s easy to erect, easy to control, and even adjusting the height of the handle can be done in seconds.

1. Lighter than most at just 28.6 lbs
2. Very compact when folded up. Can even be folded up with the battery
3. Patented “Gyroscope Straight Tracker Technology” keeps it straight
4. Speed control for downhill paths
5. 230W dual motors for going uphill
7. Has a 24v 380Wh Li ion battery that will last 2 rounds
8. Swiveling front wheel
9. Has a 4th Anti-Tip Wheel for extra stability
10. Phone and remote control holder
11. USB charging port for your hone
12. Free wheel mode (like a normal push cart) if the battery dies
15. Simply display with speed setting, battery levels, & distance
16. Great customer service (U.S. based) + manufacturer’s warranty (reported a 1% warranty use by manufacturer)

NovaCaddy X9RD might be from a brand that you’ve never heard of before, but look beyond that and you’ll find a robotic golf trolley that is also rather impressive when it comes to functionality. If you have about $1,000 to spend, this is a great option for you. The NovaCaddy X9RD is the best combination of price, ease of use, and features.

One thing that hit us was that this trolley is multi-directional, and it can move around with some serious ease. All of this is done via a well laid out remote control while the trolley itself has an LCD screen providing you with all kinds of information including how much battery is left.

However, for us, the coolest thing about this golf trolley is the way in which it’s able to move around the course. This model comes with what’s known as gyroscopic anti-deviation technology. Now, that does sound impressive, but what it basically means is that this trolley is able to move across a hill and not just up and down. This is all powered by 230W motors, which does add to the ease with which it gets up those hills.

Note that it comes standard with a lead acid battery, but another ~$200 will get you a longer lasting lithium battery.

Attaching your bag is easy since the baggage straps can be changed in an instant. This model is capable of holding any bag, so no need to feel left out if you have a lightweight stand bag or a huge, bulky cart bag.

We know that these robotic golf trolleys are expensive, but that doesn’t always have to be the case as there are cheaper options out there on the market. We recommend checking out an older model of the Bat Caddy X4, which is the Bat-Caddy X3. Even a new model will be significantly cheaper than the two mentioned above, but when you then go into the used market it does mean you can save an absolute fortune.

The trolley itself is operated by remote control and it actually has an impressive range of up to 120 yards for it to work. This is cool and it is also powered by a pair of 200W motors meaning it can get up and down those hills without any issue. It may not have the same LCD as you get elsewhere or feel as if it’s on the verge of getting you some coffee, but it’s fully functional and does all of the key jobs. Personally, if I was on the market for an electric golf bag cart, this is the one I would buy. The vastly positive reviews all over the internet definitely ease my worries.

Robotic golf cart bags may sound like a luxury to some, but they don’t have to cost as much money as you perhaps feared. At the same time, they do remove the problem of pushing or pulling your golf cart around the course giving the entire thing a far more relaxed feel and allowing you to perhaps enjoy the game a bit more. Any of the 3 models we have mentioned above will prove to be a good investment, so it all then comes down to price as to which version you may end up choosing.

So, what are your thoughts on robotic golf cart bags? Have you ever used one before? Perhaps you feel that they are something you would like to try? Let us know below what you think about this entire subject.