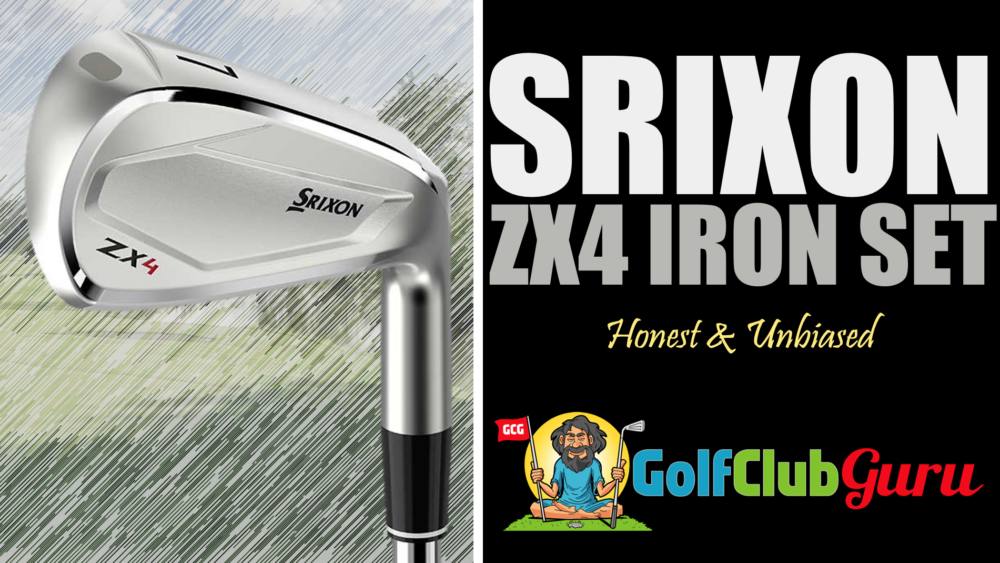 Srixon iron sets are slowly growing in popularity. Although the brand has a far more impressive global reputation, I’ve noticed more and more weekend warriors in the US picking up the brand.

The ZX series originally just included the ZX5 (players irons) and ZX7 (game improvement) irons. The all-new Srixon ZX4 irons will round out the series as the super forgiving, “super” game improvement set. Although this set isn’t nearly as appealing visually as the other ZX irons, I’d be willing to bet that a majority of golfers would score best with the ZX4.

Let’s jump into the review!

Appearance: The Srixon ZX4 irons are a bulky, thick set of irons. Large toplines, lots of offset, and extremely wide soles are evidence of the focus on forgiveness and nothing else. The wide club face is also very apparent, which many golfers will like due to the larger sweet spot. Standing over the golf ball, you just know that you’ve got all factors in your favor to hit a straight shot. That feeling is especially helpful on your bad days or if you don’t have to time to play as much as you really need to stay fresh.

If your 9 iron looks like an 8 iron at address, that’s because it practically is. The lofts of the Srixon ZX4 irons are super strong – about 3 degrees stronger than the ZX7 irons. While that may be great for your confidence, it really doesn’t have any other benefit. Truthfully, it’s a little deceiving, but that’s just me. I’m more about solid all-around clubs than simply boosting your ego by strengthening the loft of clubs.

Performance: Performance-wise, the Srixon ZX4 irons are as forgiving as they come. I felt like I truly couldn’t miss the sweet spot no matter how hard I tried. Off center hits weren’t punished badly at all, as the ball seems to want to fly straight and high regardless. Everyone is going to perform a little differently with the clubs, so I’d STRONGLY recommend that you get fitted to see if this is a great set for you.

When it comes to super game improvement irons, you’ll have a hard time finding a set that feels & sounds as great as the Srixon ZX4 at impact. The forged face results in a muted sound and less vibrations shooting through your body at impact.

There are definitely some down sides to this set. For one, I hated not knowing where on the club face I was hitting the ball. There is practically no feedback at all, which mid handicaps and better golfers will want. It was also pretty difficult to hit the ball low. Shots launched off the club face high from the start, no matter how low I tried to hit them. Regardless, these downsides are mostly not going to impact a higher handicap or newer golfer who just wants an easy-to-hit set of irons that fly far and straight.

Who The Srixon ZX4 Irons Are Best For

If you want to hit the ball straight and far (without care of distance control, feel, feedback, appearance, etc.), then the Srixon Zx4 irons are a great fit for you.

However, keep in mind that you are going to improve over time. You are going to expect higher of yourself over time, and you may not want to be “stuck” with a super game improvement iron set that you shelled out a lot of money for.

But, if you don’t expect to improve drastically anytime soon, or if you just want to make golf as easy as possible in the short term, then the Srixon ZX4 iron set is a great set for you.

Similar Iron Set at a Much Lower Price

Don’t get me wrong here. Srixon irons are great. However, I don’t think the Srixon Zx4 irons are worth it at $1,200.

This set in slightly used condition will last you (or whoever you end up passing the clubs down to) forever, and it will hold its value well. You can pick up a solid used set for around $300, and the value will stay around there for YEARS, unlike the value drop that the $1,300 Srixon ZX4 irons will experience after your first struck golf ball.

Well, that’s the end of my review of the Srixon ZX4 irons. Thanks so much for reading!