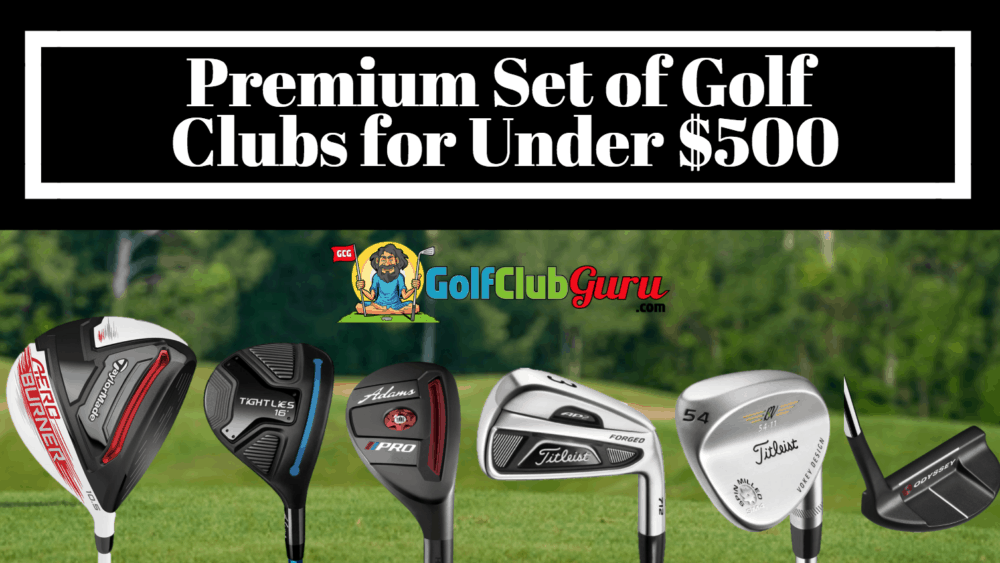 Set of Premium Golf Clubs for Under $500

We all know golf clubs can be expensive. If you decide to cheap out and get a really crappy set of complete clubs, you probably won’t be happy. That is, unless you don’t care all that much about golf.

If you are a serious golfer, though, or if you see yourself getting much better in the next few years, you need some good clubs. “Good clubs” to me means name brand clubs. Clubs that have been proven over the years with lots of amateurs and pros playing them. I won’t be recommending super cheaply made, off-brand clubs here. I will only be recommending clubs that will perform extremely well, even when you are on a budget.

If you have $500 to spend on clubs, you’d be surprised what that can get you on eBay. No other website can sell clubs at eBay prices, or else there wouldn’t be any money to be made.

With $500 on eBay, you have to be pretty particular about what you buy and what condition you buy it in. If you are going to be buying all brand new clubs, then you will have to resort to cheaper, lower quality clubs. If you are willing to compromise and buy some clubs used, though, you can end up with a killer set for under your budget.

This article is going to go through an example set of clubs, including both new and used clubs, that you can buy for under $500. Obviously buy whatever you want, but these are the clubs that I would recommend those on a budget to purchase.

Why buy a set of individual clubs for under $500 vs. a complete Callaway Strata Set?

Note: all links & photos that you click on will take you to the respective clubs available on eBay — by far the best website for buying golf clubs when you are trying to stay under that $500 budget.

TaylorMade is the greatest driver brand for those that want an absolute steal. They make great drivers, and price them at around $400 each when they come out. They do this normally 2 times a year though, resulting in reduced prices for the older drivers. The great thing, though, is that driver technology has not improved in the past 5 years. Drivers that are 5 years old are just about the same as the same brand’s drivers that they release today.

For that reason, this TaylorMade AeroBurner driver is a heck of a deal. It was released many years ago, but they are still selling off the inventory that they didn’t sell. TaylorMade has released so many models since then, so the prices consistently drops each year. At this time, it is one of the best drivers that you can buy on a budget today.

This driver is just about as long as it gets. It’s not adjustable, which is no big deal. Just means that you will have to adjust your swing as opposed to the driver (gasp!). I’ve always been a fan of the white head TaylorMade drivers. Just a very appealing look in my opinion.

For a brand new driver, you’ll end up paying less than $100, which is crazy compared to the prices on other drivers.

Alongside TaylorMade, Adams is also an incredible brand for budget-focused golfers. They don’t release clubs as often as TaylorMade, yet their prices are very similar to TaylorMade’s older clubs. Adams shines in the fairway wood and hybrid side of golf clubs, and they know it. That is where a large majority of their sales come from, even though they also have great irons and drivers too.

This Adams Tight Lies 3 wood has 16 degrees of loft, one more than most 3 woods. This is great for when you hit three woods off the deck, as a little more loft adds a bit of forgiveness and helps the ball into the air. Off the tee, though, you might notice a minuscule distance loss.

As the name implies, it is great off of all types of lies, even poor ones. Most three woods would get caught up in tall grass or a hazard, but this head is a bit smaller and built in a way to cruise through all types of terrain to make solid contact with the ball .

A few have sold for far under $100 in the past few months on eBay.

I can’t speak more highly of Adams Pro hybrids. They are cheap. They are easy to hit. And they perform. That’s all I look for in a hybrid. I used to play a Titleist hybrid, until I switched to this hybrid when it was on a huge sale.

I’m super glad I did. The Adams Pro hybrid looks great at address, feels great at impact, and flies high and far. My ballstriking from longer distances (200-230) has improved greatly after buying this hybrid. I just have one hybrid, so I got a 3H at 20 degrees. You might want to get two hybrids and spend a little less on irons instead. If you struggle with ballstriking, especially with longer irons, I think that would be a very good idea.

You can buy a brand new one for around $40ish, which is incredible for the value it will provide to your game! Probably the best $40 that you can spend on golf clubs.

If you are a high handicapper or newer golfer, Callaway irons are a great fit for you. Callaway was one of the first golf brands to produce irons that are meant solely to fly straight and long. They reduced the lofts of the clubs, and they gave them the “hottest” faces that they could. They want the ball to go far, and the customers were pleased.

These Callaway X Hot irons were made a few years ago, but they are still loved by golfers that want to hit the ball far. Distance control can be a tad bit difficult for these irons, but that’s not a huge concern for newer golfers.

When it comes to forgiveness, these clubs are top notch. They have very thick top lines, which is a good sign of a club that is very forgiving. Even when you don’t hit it square on the face, you will still end up with a decent golf shot.

You can definitely get a set of them in used condition for around $200 bucks. I’ve seen a few sets sell for less than that, so they were probably a little more used than most sets.

If you are going to be playing golf for many years, you might want to consider spending a little more and sacrificing elsewhere. Maybe buy used a used driver, three wood, and hybrid as a result. That way, you can spend a little more on irons and get a less-used set.

If you are not a new golfer, but you aren’t an incredible ballstiker either, then the Titleist AP2 set is great for you. This set is actually a great iron set for low handicap golfers as well, but will allow you as a mid handicap golfer to improve your ballstriking without killing your wallet.

The AP2 set is by far Titleist’s most popular irons for better-than-average golfers. They have sold tons of sets, and I’m not surprised. I’ve hit multiple different sets of AP2, and couldn’t notice a difference when it came to the year/model. Therefore, I would suggest you get an older set like 710 or 712. They are much cheaper and still perform just as well. Try to get a slightly-used set, as opposed to one with lots of wear.

The Titleist AP2 iron set will allow you to grow as a ballstiker. The sweet spots are a little smaller than the set listed above for high handicappers. However, you can learn to hit fades and draws much easier. Plus, distance control is a TON better than a set meant for newer golfers.

If you are a great ballstiker that hits lots of greens and fairways, a nice set of Mizuno MP 69 irons is a great option for you. These irons are less forgiving than others, but the distance control is great. If you consistently hit the center of the face, you’ll get a lot of benefit out of a blade iron like this, as you can really dial in your distances.

If you are a low handicap golfer, definitely don’t think that you NEED blades. You can play just fine with a set of more forgiving irons. The top lines of the MP69 irons are very small, so that might be a little intimidating at address if you are not used to them.

Mizuno blades (really all blades, for that matter) are always a little cheaper than most irons, which has always confused me. It must be because they require less materials and less designs on the club heads. You can pick up a set for around $200 on eBay.

Stay with me! All we’ve got left is wedges and a putter. It’s pretty standard advice to have 2-4 wedges in your bag. If you are closer to a beginner, 2 wedges will be just fine. Typically just a pitching wedge and a sand wedge of some sort.

Personally, I have a PW as part of my iron set and a set of three Cleveland RTX 588 wedges (50,54,58). However, I am on the market for a new set of wedges, so I will end up buying slightly used Cleveland 588 or Titleist Vokey SM Series wedges. These two brands are the best budget ones that you can buy.

Brand new Cleveland 577 RTX 3.0 and Titleist SM 7 wedges are far too expensive in my opinion, so I would encourage you to look at their older models. The classic Cleveland 588 RTX (not 2.0 or 3.0) or Titleist Vokey SM series (stick with SM4, SM3, SM2, or the original Spin Milled) wedges are my favorite picks on a budget.

I would look for a slightly used set of 2 wedges that fit the gaps you are trying to fill. Typically a 2 club wedge set will look like this: 54 and 58, 52 and 56, 52 and 58, 54 and 60, or something like that. As long as there is at least a 4 degree gap in between your wedges, you will be good. Better players need to best determine which gaps they need to fill in their set.

If you go to your local sporting goods or golf store, you will be looking at putters costing $120 or more. Putters never “go bad”, so I’d look at getting an older, slightly used model. The Odyssey (owned by Callaway) brand is one the biggest sellers of putters in the world. They have produced high quality putters for years, and their older models always drop in price each year.

One of their sets, the White Hot Pro series, was one of the most popular models released. Their prices are very fair today, allowing you to pick one up for $40 slightly used. If you want to save even more money, look at their older set the White Hot series (not “Pro”). These putters are light grey, as opposed to darker grey from the Pro putters. I’m a bigger fan of the darker color personally. They both perform the same, though.

Depending on the model and the quality, you can pick up a Odyssey White Hot putter for under $40 if you look hard enough.

And with that, you now have a complete set of clubs for under $500!

Let me know in the comments below if you think you have the best set of clubs that you paid less than $500 for.