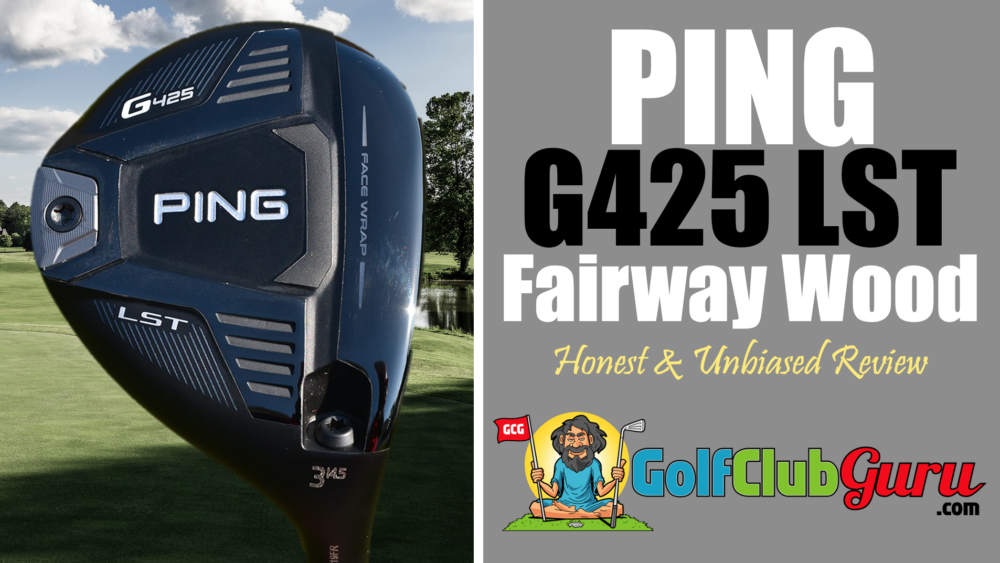 If you generate too much backspin on your fairway woods shots, then the Ping G425 LST fairway wood could be the best fit for you.

The low-spin PING G425 LST fairway wood, on average, spins about 200 rpm less than the previous model (the Ping G410 LST). They don’t offer a direct comparison to the Ping G425 Max fairway wood, unfortunately. But I’d wager the LST model results in an average reduction of around 300-500 rpm compared to the standard Max fairway wood.

Disclaimer: Low-spin heads aren’t for the average golfer. Generating too much spin is typically due to 1) very fast swing speeds or 2) hitting down on the ball too much. Problem #1 is a good fit for a low spin head like the LST. Those that generate lots of club head speed, even with a great angle of attack, can oftentimes create too much backspin on their shots. However, I’d wager only the top 5% of golfers have this problem. Problem #2 is far more common – and the solution is not to buy a new $300 fairway wood.

Ping has finally made some changes to the appearance of their woods – no more turbulators that have been standard for many Ping releases in a row. I really like the solid matte black crown. The three aiming dots are a nice touch, as a blank head can look a little boring to some.

Low spin heads are typically more compact than standard fairway woods – and the Ping G425 LST is no exception. It’s a more compact head that most golfers prefer the look of. However, a smaller head can sometimes be a little intimidating to those that like the extra forgiveness of an oversized club head.

Taking a look at the club face, you’ll notice just how flat the sole is. I’m a huge fan of this flatter sole compared to a more rounded sole that you’ll find with most other brands. Flatter soles are a little more forgiving on off-center hits. Ping has also introduced a wrap-around club face (the “FaceWrap”) that flows to the sole of the club to improve shots hit low on the face.

As someone that often times DOES create too much spin, I absolutely fell in love with the Ping G425 LST when I tried it out. I tested it out with the stock PING Alta CB Slate shaft at a local demo day in Auburn, Alabama. On average, I was hitting the ball about 10 yards longer than my current gamer (older Callaway RAZR-X Black). The distance wasn’t all carry, though. I was carrying the ball the same, but with a much more penetrating ball flight that rolled further than my Callaway wood.

Off center hits definitely had a different sound and feel to them (sounded louder and more hollow), but the results weren’t badly penalized at all. Shots hit low on the face didn’t fly very high (as should be expected), but they still flew straight and rolled what seemed like a mile. I hit my fairway wood off the tee pretty often, so I’d definitely benefit from a “fairway finder”, penetrating three wood like the Ping G425 LST.

Overall, I simply loved the penetrating ball flights and feel/sound of a well struck shot with the Ping G425 LST. If money were no concern, I’d definitely game this fairway wood in a heartbeat. But, remember that this club isn’t for everyone. If you are creating too much spin, make sure that the spin isn’t just coming from a bad angle of attack before spending hundreds on club as a band-aid.

Who Should Buy the Ping G425 LST Fairway Wood?

The Ping G425 LST fairway wood is best for a golfer where all of the following is true:

3) Budget is no concern. If budget IS a concern, then head on to the bottom of this article for a better value alternative.

As always, I strongly suggest that you try the club out first before buying. You may think that it’s the club for you – but in reality, another club could be a much better fit. You won’t know until you try it.

The Ping G425 series includes three fairway woods: MAX, LST, and SFT. Here’s how the LST stacks against the other models.

Ping has made low spin drivers for many years now. While the “LST” line of fairway woods started with the G410, Ping made low spin models under the “Stretch” name before that. My best value recommendation for a low spin fairway wood? The Ping G400 Stretch.