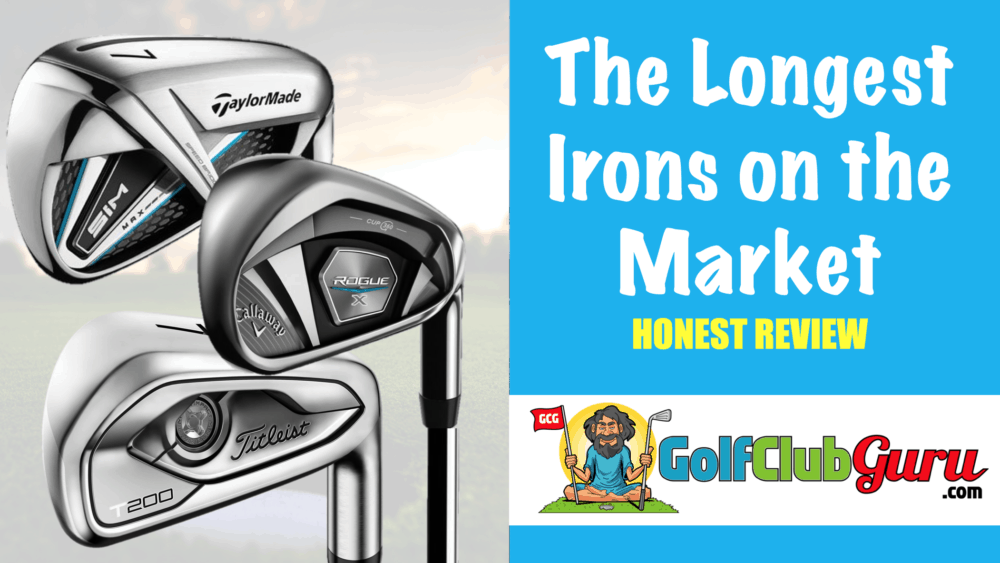 The Longest Men’s Golf Iron Sets on the Market

Getting great distance has a lot to do with ball speed, and this year the name of the game with irons is ball speed. All manufacturers worked on increasing ball speed and moment of inertia. Some succeeded and created some insanely long irons. Here are what we believe to be some of the longest irons on the market, and of course, our better budget option in case these are a bit too expensive for you.

Sometimes it doesn’t seem possible that TaylorMade can make irons from one year to the next, and they just keep getting longer. How long will this go on? At some point, the distances will have to cap off, won’t they? It’s worth noting that the differences each year are MARGINAL. We’re talking a yard or two compared to the less expensive, older model mentioned at the bottom of this article. However, this article is about the longest irons on the market, so the Sim Max currently take the cake.

Somehow they did it again this year with the release of the TaylorMade Sim Max irons. The trendy M6 set of 2019 was improved and worked upon to make this SIM Max a great addition to the golf world. In addition to the Speed Bridge technology that helps provide the incredible distance, these irons have a great feel at impact.

Most times, a distance iron is not going to feel like a forged club, but TaylorMade did an excellent job making that happen with this set. The face on the Sim Max irons is skinny, which allows the high-speed ball speed. These irons are not just long, though; they are forgiving as well. This is a bit of a thicker club head, and this iron is built for the mid to high handicap player. Low handicappers are going to want something with a bit more workability, with a thinner profile at address.

The last addition to the SIM Max that is worth mentioning is the ECHO Damping System that helps to eliminate any vibration at impact. This technology is partially what adds to the great feel.

Titleist released their new T series of clubs earlier this year. They have been working with the AP irons for quite some time now, and it was time for a change. If you are a low handicap player looking for distance, the Titleist T200 irons are the way to go.

This is a player’s distance iron. You will not get incredible forgiveness with this club; you will get plenty of feedback when you hit a poor shot. However, you can launch these irons high and far.

Players’ distance irons can be hard to find. Most players are considered to have a fast swing speeds and plenty of distance, but this is not at all the case. There are plenty of low handicap golfers that know how to score but still struggle with distance in all areas of their game.

The ball speeds coming off of this clubface are higher than previous Titleist models. Titleist used their Max Impact Technology to make sure that in addition to speed, you also get distance control, superior sound, and feel. These are the things that all players are going to look for in their game.

The T200 are a progressive set of irons, so as you move closer to the longer irons, the irons will get a bit thicker and more forgiving. This is an option that even very low handicap players will enjoy. Let’s be honest – long irons can simply be hard to hit. Having a bit of help on those more challenging to hit irons makes plenty of sense, especially when you struggle with distance.

The downside to the T200 irons is, of course, the price. Like anything with the Titleist name on it, these clubs are going to be expensive. The good news is that we have found you an alternative you should consider if you are looking for a bargain price on a very long set of irons.

The Callaway Rogue X irons were the longest iron set on the market when they were released a couple of years ago. Bonus: they offer a lot of forgiveness, too.

The downside? They are super bulky at address, they don’t feel great at impact, and they are hard to work the ball with. However, they feature the 360 Face Cup technology and Variable Face Thickness. The combination of these two concepts helps to create a ton of ball speed off the clubface.

Price Comparison Between the Three