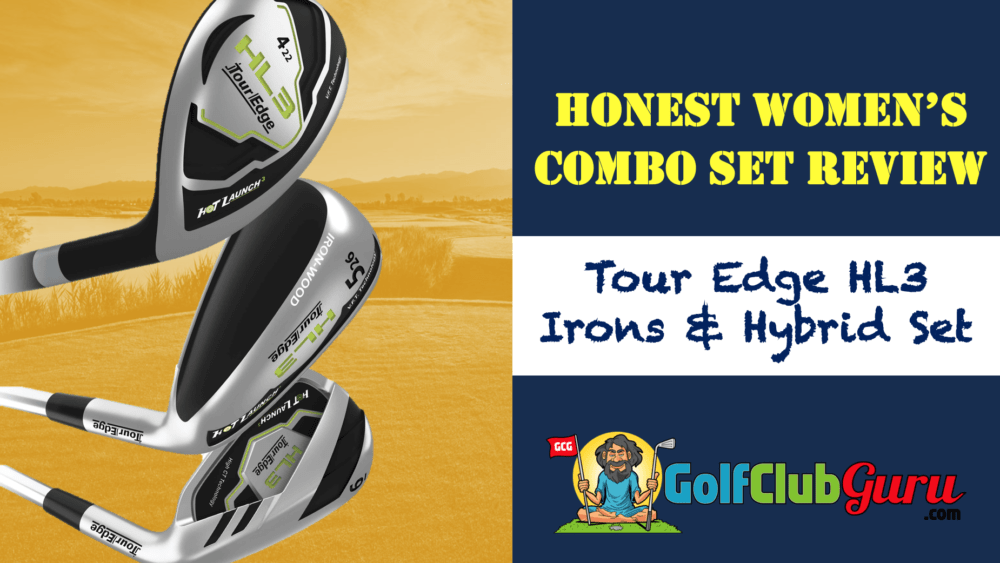 Tour Edge doesn’t get enough attention for the golf clubs they put on the market. Their clubs are high performing, feel great, and usually pretty cost-effective. The HL3 combo set is not the latest release from Tour Edge, and if you keep an eye on it, you can find it on sale sometimes. This set has dropped in price since its initial release, and we think it’s a great value that women golfers should seriously consider.

Any time you see the word combo set mentioned, it is essential to figure out what the combo is. This particular set is called a triple combo because it combines more than just irons and hybrids. The HL3 collection consists of two hybrids (the 4 & 5) two ironwoods (6 & 7) and three irons (8,9, PW). Many people may not be familiar with an iron wood. An iron wood is basically a combination of the iron and the hybrid just as a hybrid is a combination of an iron and a fairway.

The iron woods in this set have a thicker sole and are intended to help with launch on the harder to hit irons. The three irons in this set, the short irons, are a traditional cavity back iron to give players a little more workability and control with these clubs. When sets are hybrids or iron woods all the way down to the sand wedge, it can be hard to control non-traditional shots like a punch shot or a bump and run, etc.

One of the things we love best about Tour Edge is that they are not going to throw a bunch of terminology in our face about this combo set. There is no Microhinging or Flash Facing or Triaxial Carbon; it’s just simply that these are made to be both forgiving and high launching.

The shaft on the Tour Edge HL3 Ladies Combo set is a UST Mamiya graphite option. This shaft was explicitly made for Tour Edge to put in these irons. Overall, UST makes some high-quality shafts, and the fact that all of these clubs come in graphite shafts for this price is quite impressive.

The only negative we can say about this combo set is the fact that it is not overly long. If you are playing with a set of irons from the last few years, you will very likely notice no change in distances when switching to the Tour Edge. Now, keep in mind, if you are hitting the ball a long way, but in the wrong direction, you will then notice some significant improvements switching to this club.

The pricing on the Tour Edge combo set is exceptionally fair. In fact, it is hard to find too many options priced lower than this set, especially for a combo set option. If, for some reason, you don’t want or need the iron wood or hybrid part of this set, you can purchase just a Tour Edge HL3 iron set and save a bit of money.

If you want to save a little money and you don’t mind a used set of clubs, our suggestion would be to take a look at the TaylorMade Kalea.

The Taylormade Kalea combo set features a four and five hybrid, and the 6-PW and SW are going to be irons. Although you will lose out on the iron wood technology that the HL3 offers, this Kalea set is extremely forgiving and easy to hit.

Kalea features the TaylorMade speed pocket technology. These golf clubs are lightweight, and they are very high performing. Initial release prices on the Kalea set were extremely high. The Kalea Combo set features a TaylorMade Ultralite Graphite shaft very comparable to the UST that is in the HL3.

There is no question that the Kalea Combo set has some great features; you just have to find it used to get a great deal on it.

We always love to give you an honest review of some new golf equipment and then a cheaper alternative. With the Tour Edge HL3 Combo set, it was hard to find an option that we genuinely believe to be a better value. This set of irons features everything you could need in an iron set; it’s incredibly forgiving and easy to launch. Plus, it is offered at a great price.