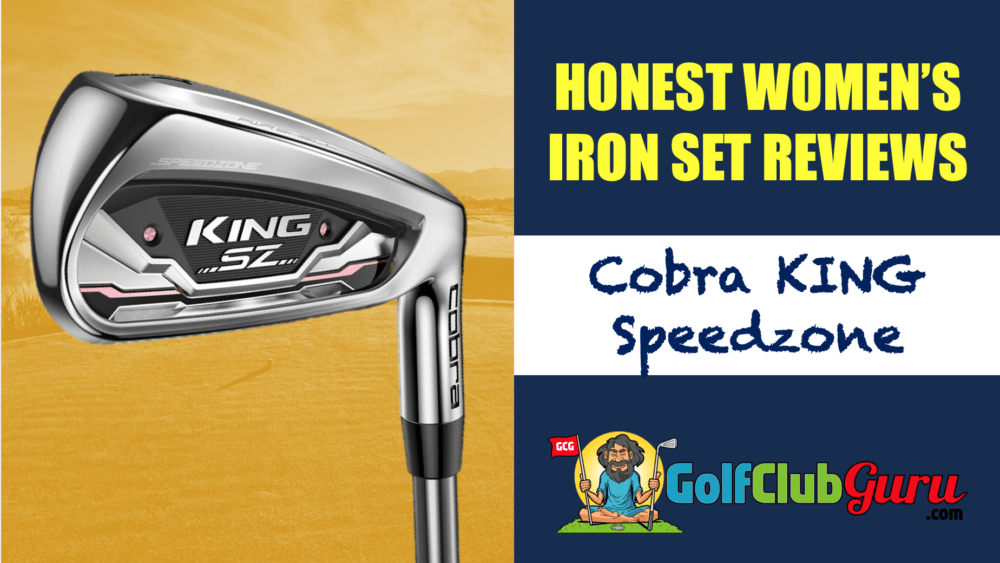 Cobra irons have long been a favorite choice of ours for the female golfer. Cobra does such a great job of combining playability and forgiveness. They create irons that feel good, perform well, and are easy to hit. The new Cobra Speedzone irons for women are another solid choice by Cobra.

Are they right for your game?

We will give you our honest review of the ladies Speedzone irons to make sure they are the right fit for you.

Before we even get into the technological advances on the Speedzone irons, we need to start with Cobra Connect. Cobra Connect is a technology that was released several years ago, and it allows you to track your accuracy and distances using an app on your phone. Yes, your clubs are actually smart clubs.

With Arccos technology, there is a sensor in the grip of your club that will report information back to your phone. We love that this feels like you have your own personal caddie with you at all times. Do you think you hit your seven iron 125 yards? It turns out you only hit it 120. This will make a big difference when you are hitting over a water hazard.

If you are in the market for a new set of golf irons, chances are you have heard the term carbon fiber get thrown around just a bit. Cobra started using carbon fiber in the woods a few years back, and it allowed them to add quite a bit of ball speed. The new Cobra King SpeedZone Women’s irons have a carbon fiber top line. This helped lead to a much lower center of gravity. Low center of gravity in a set of irons will directly translate into more speed and better launch.

When Cobra released the F9 irons last year, they looked a bit different than other options on the market. Cobra did extensive research and found that their new Speedback shape allowed for the lowest center of gravity and a higher moment of inertia. The shape is quite a bit different than a traditional iron, but it is useful. The F9 did well enough that the Speedzone irons came back with the same Speedback shape. If you are a visual player who needs to look at a thin and classic design, the Speedback may not be the club for you. The size of the clubhead on this

Progressive iron shaping is something you will see many companies do in the years to come. The progressive shaping technology is a way to build a set of clubs so that they get progressively more helpful. There is a reason why many women golfers love their pitching wedge, nine iron, and eight iron. Those clubs are more comfortable to hit solid because of their loft. They require less swing speed to hit correctly.

As you move to your seven, six and five iron, things get a bit more complicated. Cobra made those clubs a little more forgiving, a little easier to launch. The design is not a full hybrid design, but you will notice the five iron looking a bit more like a hybrid than the pitching wedge does. Again, if you like the look, this is some great technology to have in your golf bag.

The real problem with the Speedzone irons is that they are a bit expensive. In all honesty, they are a bit higher than the Callaway Mavrik and the TaylorMade Sim, which we are still having a hard time wrapping our head around. However, if you like Cobra and you want something light and easy to hit, we have a solution.

The Cobra F-Max Superlite women’s iron set is a few years old but has not lost any of its technology! This set is very lightweight, effortless to launch and a much more traditional looking club head. The other good news about the Superlite is that it retails for a few hundred dollars less than the Speedzone.

The F-Max iron set never made a five iron, so if you are set on carrying a traditional iron as opposed to a hybrid, the F-Max may not work well for you.

The Cobra Ladies Speedzone irons will do very well this year, especially in the combo set option. They are not cheap, and traditionally speaking, Cobra will start dropping the price quite soon. If you want some great technology in a club that is only a few years old, we recommend trying the Superlite. The F-Max line from Cobra was very well known for its forgiveness, and we are not convinced that you have seen the last of the F-Max options. Also, if you give the F Max Superlite a try, you better try the Driver too!