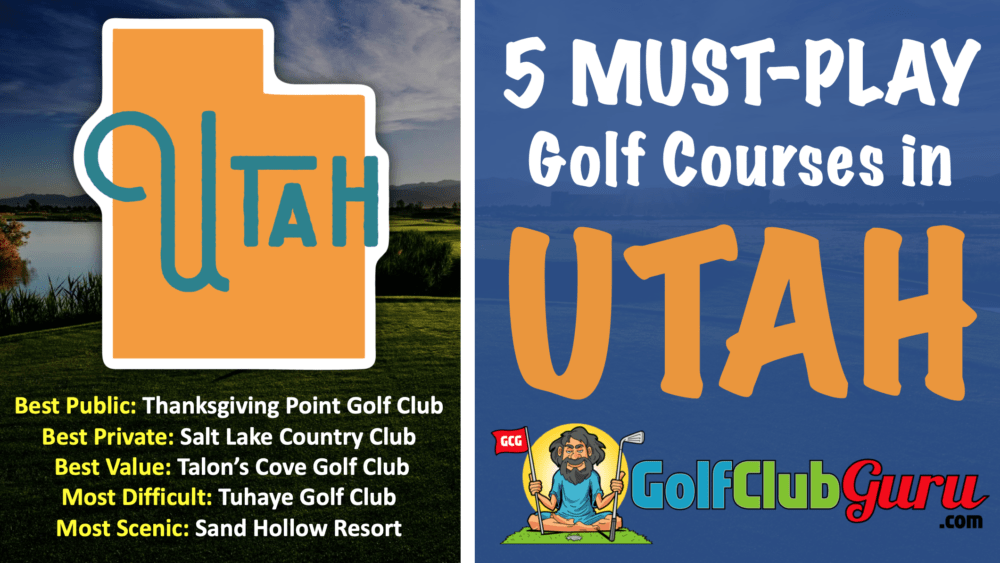 Outdoor adventure has nearly become synonymous with the state of Utah. Home to Zion National Park, the Great Salt Lake, an extension of the Rocky Mountain Range, the list goes on and on. The extensive range of elevation in Utah makes it most obvious to admire the brilliantly light and powdery snow that covers the down-hill ski runs in the mountains all winter long, but it is the same geography that makes Utah a high performing underdog when it comes to golf links.

With majestic mountains and beautiful red rock formations, the golf courses of Utah make full of the opportunity provided them given their incomparable landscape. Here are five of the Utah golf courses that every golf enthusiast will want to make room for on their list of top places to play.

The Country Club in Salt Lake City is one of the few “Golden Age” tracks in the state of Utah. It was originally designed and built in 1920 by Willie Watson – who is better-known for his architectural work on The Olympic Club in San Fransisco, CA as well as Interlachen Country Club in Edina, MN – in partnership with Harold Lamb.

A par-72, this course comes in at just over 7200 yards, rated at 74.7. Following the traditional standard, the opening hole’s most eminent defenses are the trees lining the lesser curvature of this dog-leg right par-4 as well as a bunker strategically placed just outside of the ideal landing zone.

The course’s signature hole is a challenge to both mind and body while stimulating the senses with a gorgeous layout. Running all along the left side of the left-handed dogleg, Parley’s Creek works as a buttress opposing the bunkers lining the right side of the hole. After hitting your approach, you will cross the ‘Branca Bridge’ which connects the fairway to the green, which are separated by the creek.

With signature golf and gorgeous views of Salt Lake City and the surrounding Wasatch and Oquirrh mountains, The Country Club is worth the effort of gaining access behind the ropes of this private club.

The opening hole is a short par-4 at only 379 yards from the back tees, but do not be fooled. The longer the tee shot, the narrower the landing area, guarded on both sides by bunkers. The approach is no push-over either, with the angle of attack from the center cut putting bunkers both short and long of this narrow green into play.

With three of the four par-5’s on this course playing at over 600 yards from the back tees, it is no surprise why this course has been the site of numerous championship-level golf events. Birdies may be harder work than usual on the par-5 line-up, but the 325-yard par-4 third hole will certainly draw your full attention as a drive-able green. However, you may need the same club off the tee of the signature par-3 hole #17 at 250 yards.

At as low as $50 for a round, playing this great course can fit into just about anyone’s budget.

This regulation par-72 layout at Tuhaye Golf Club will certainly require the best strategy and swings to beat your foursome. At 7800 yards from the back tees, this course plays long even in the thin mountain air of Utah. Designed by Mark O’Meara and built in 2009, this course overlooks the backside of the well-known Deer Valley ski area and the Jordanelle Reservoir.

The lengthy par-5 hole number three is the signature hole with a split fairway running downhill, framing views of surrounding Park City area. This hole entices longer hitters try and reach the green in two, but the water lining the right side of the green makes for a difficult shot and plays into the golfer’s classic risk-reward instinct. This hole is rated as one of the best golf holes in the state of Utah.

Widely seen as southern Utah’s best golf course, the Championship course at Sand Hollow Resort is where to play if you are after the most stunning views around. In stark contrast to the powder dusted mountain tops that Utah’s ski resorts offer, at Sand Hollow an entirely different experience awaits. Standing atop many of the tee boxes, especially on the back nine, will produce a euphoric state of floating in the clouds above the rocky desert below.

If the views are not enough to keep you interested, the layout of this par-72 challenge might just do the trick. At just over 7300 yards from the back tees, the intrigue of resort golf interfaces with a great championship design.

With in-season rates as low as $70 for an 18-hole round, there is little, if anything, left to be desired after experiencing this wonderful golf facility.

While it may cost a small fortune to play some of the best-known venues in golf, playing similar quality golf courses just without the reputation can be accomplished on a reasonable budget. At TalonsCove Golf Club, rates are as low as $33 for an 18-hole round walking. To sweeten the deal, it is ranked as one of the top public courses in Utah.

Totaling nearly 7100 yards, this par 72 is rated at 72.5 and is located on the inviting shores of Utah Lake.

While the snow may be what brings many to Utah in the winter months for world-renowned ski resorts, the summer offers just as worthy an attraction to the state. With brilliant designs and unbeatable views the norm at many of the courses in the Beehive State, making Utah the destination of your next golf getaway is just as great an idea as making the annual ski trip to the same state.

Did we miss a course? Share your Utah golf experiences in the comments section below.