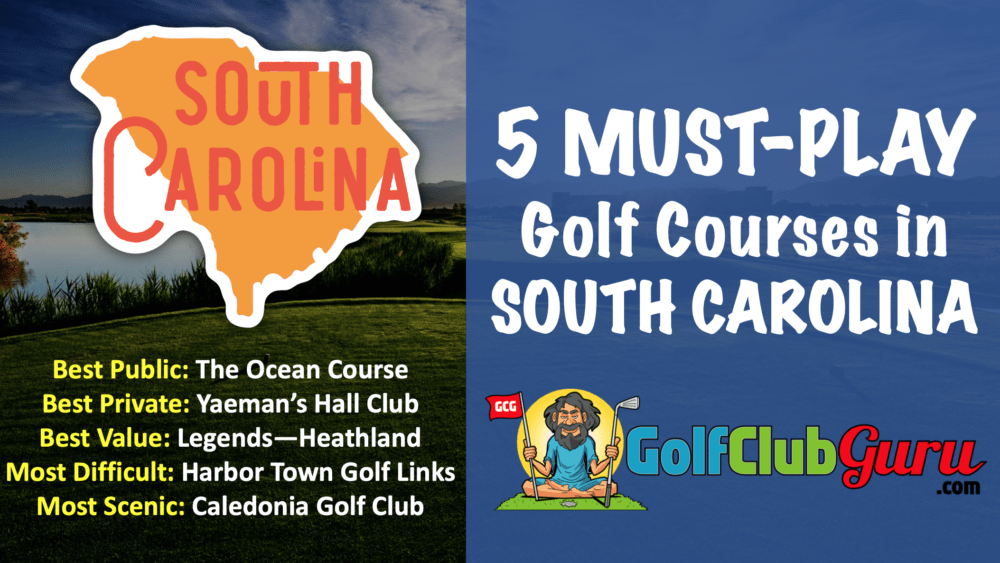 South Carolina is one of the top golf destinations in the country. Every year, millions of tourists flock to the state’s hundreds of beautiful courses. While its neighbor to the north has built its best courses in the mountainous western portion of the state, all of The Palmetto State’s best tracks make their home in the coastal region. Myrtle Beach, Hilton Head, and Charleston each have enough courses to make any other state jealous (except maybe Florida).

To help you wade through the difficult decision of which venues to start with, here are five South Carolina golf courses you need to play.

Kiawah Island Resort alone has five of the best golf courses you could imagine, all crafted by some of the leading designers in the game. But the Pete Dye designed Ocean Course is in a class of its own.

No other course in the country boasts as many seaside holes as The Ocean Course with ten of the eighteen holes running along the Atlantic. Naturally, this layout means golfers are treated to some breathtaking views…and most treacherous conditions. Wind howls unabated and can make playing The Ocean Course particularly difficult.

The course opens with a mid range par 4 featuring a long bunker down the right side of the fairway. On the other side of the bunker, water also comes into play. From there the round continues to be challenging as you will either be battling wind or distraction from the sheer magnificence of the course.

On the back nine things come to a close with an incredible hole that combines sand dunes, rolling fairways, and a green protected on the left by a massive bunker.

The Ocean Course is 7356 yards from the tips and is a regulation par 72.

This unforgettable course is open to the public but it will cost you. If you are a guest at the resort, a round at one of the five championship courses is included in your stay…but the Ocean Course costs an additional $120 to play. For non guests, peak season rates can be in the mid $300’s for 18. But at a course like this: #worthit.

Located on the outskirts of North Charleston, Yaemans Hall Club gets the nod as the best private course in the state. While the course was in disrepair for much of the 20th century, it has been restored to its former glory and now plays like the championship course it was meant to be.

The course features contoured greens and prodigious bunkers throughout. The course also makes great use of the natural landscape and is a throwback to the golf tradition of yesteryear.

Rather than spend too much time on a course you can’t play, lets move on to the many courses that are just as good, if not better, and are open to the public.

While you could easily make the case that The Ocean Course is more challenging, in the name of fairness, Harbor Town Golf Links gets the green light as the most challenging course in South Carolina. With tight fairways, tiny greens, and a meandering lagoon to contend with, this demanding track will give you fits.

Hole 11 offers a particularly tricky approach to the green as bunkers surround the putting surface and a tree on the front right makes for a narrow angle of descent. Elsewhere more sand and water conspire to nearly envelope the greens and make getting on and staying on the dance floor devastatingly difficult.

Harbor Town isn’t all that long, measuring just over 7000 yards from the tips, but this par 72 track does have a course rating of 75.6 and a slope rating of 148.

Like many of South Carolina’s most coveted tracks, a round at Harbor Town isn’t cheap and can cost upwards of $300 and more for 18.

Again, The Ocean Course could easily be considered the most scenic in the state (any of the other Kiawah Island courses could too for that matter). But I would be remiss if I didn’t mention the best course in the Myrtle Beach area—Caledonia Golf Club. This stunning track features dropping willows, elegant water hazards, and makes great use of South Carolina’s lush, varied landscape.

What’s more are the picturesque mound surrounded greens with trees crowned around them. All of this mesmerizing scenery is a feast for the eyes and is in a word, remarkable.

Caledonia is a manageable course at just over 6500 yards from the tips and is a par 70.

Unlike many of the other courses found in South Carolina, this masterpiece can be played for a reasonable price…at least in the offseason. While rates climb as high as the obligatory $200 range during peak season, other times of the year, you can play 18 for around $100. Not bad for this course of mythical beauty.

Another Myrtle Beach course, Legends (Heathland) is perhaps the best deal in the state, though with some of the astronomical green fees in South Carolina, that isn’t all that hard to do. Nevertheless, Legends is a championship level course you can play for a decent price.

This Tom Doak designed course features rolling fairways and feels like a transplant from the British Isles. Legends also showcases the perfect blend of sloping greens, deep bunkers, and flowing streams, all featured agains the backdrop of the exquisite South Carolinian countryside.

You can play this astounding track for as low as $79 for 18.

One of the premier golf states in the country, there is no better place that South Carolina for you to go to hit the links and enjoy an unforgettable golfing getaway. Whereas many states’ best courses are private, in South Carolina, though it might cost an arm and a leg, you can play knowing you are enjoying the best the state has to offer. Happy golfing.

Did we miss a course? Share your South Carolina golf experience in the comments section below.