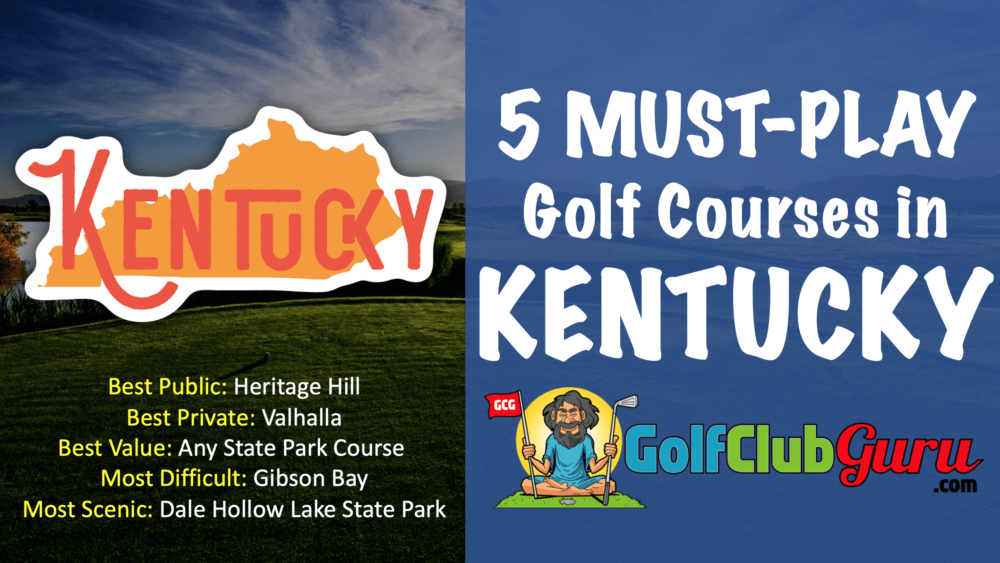 The Bluegrass State is perhaps best known in the golfing world for Valhalla, the private course in Louisville, Kentucky and host of the Ryder Cup and of numerous PGA Championships. But Kentucky is more than just one course. It has a laundry list of great public tracks you can play too. Of course Valhalla is an unforgettable venue and is on the list below as best private course in the state. But pay attention to some of the other undeniably awesome golf courses found elsewhere in the state.

It might not have the same golfing heritage as some of the coastal states, but here are five Kentucky golf courses you need to play.

This Jack Nicklaus designed course is a fixture on the PGA Tour and has hosted some incredible, memorable tournaments. The Golden Bear was at his best when he planned the layout of Valhalla. Each hole is a unique blend of elegance and grit.

The front nine begins with a dogleg left and is littered with shot-eating bunkers, especially as you near the green. The second hole, dubbed “The Ridge,” boasts a tight fairway and a narrow creek that runs down the left hand side of the entire hole. Shot making is at a premium on the first couple holes and it takes a lot of work to keep your ball form getting either wet, sandy, or lost.

The courses finishes with the long, beautiful par 5 18 which features sand to the left, water to the right, and a three tiered green shaped like a horseshoe. The final hole of this majestic course also offers a stunning view of the prestigious clubhouse as you walk up to the green.

From the championship tees, Valhalla measures 7540 yards and is a regulation par 72.

While this course is truly unparalleled in the state, it is also reserved for members and professionals. The only way to get on is by invitation or qualification.

A relative newcomer to the Kentucky golfing scene, Heritage Hill Golf Course was built in 2008 and was an instant success. It was named a top ten new course the year it opened and is currently a nationally ranked public venue.

Trees form a natural barrier on the left hand side of the fairway on Hole 1 and also guard the front right side of the green. The front left side of the green isn’t wide open though as a pair of bunkers act as sentries tasked with keeping balls from reaching the pin.

The back nine begins with a massive, shark tooth shaped green protected by several more bunkers. The course finished with a mid length par 4 that has water on the left hand side. Keep to the right in order to keep your ball dry and in play.

From the blacks, Heritage Hill measures 7112 yards long and is a regulation par 72.

The best part about the course is that it isn’t nearly as expensive as courses of comparable quality. Midweek you can get a round of 18 in for $52 walking during the daytime hours. The twilight rate is even better at $42 for 18.

With rolling, zosiya fairways and undulating, bent grass greens, conditions are perfect at this masterpiece. The course also makes great use of thick trees and vegetation throughout and boasts an army of well placed bunkers from beginning to end.

Because it is part of the fabulous state parks system, the rates to play at Dale Hollow are very reasonable. On the weekend, 18 holes walking is $48 but dips to $45 during the week and $38 after 4 pm.

One of the more demanding tracks in the state is Gibson Bay Golf Course. Located on the southwestern tip of Lake Reba about 40 minutes south of Lexington, Gibson Bay features sprawling fairways surrounded by legions of tall trees. The course also incorporates the lake and other water hazards into the layout to make the course even more difficult.

After a rough front nine, the back nine begins with an even more challenging four hole stretch of three par fours and a par three. If you can keep your ball straight and hit as many GIR’s as possible, you might be able to escape unscathed.

Gibson Bay measures 7130 from the blacks and is a regulation par 72.

The course is also a good deal with twilight rates after 3:30 pm getting as low as an unthinkable $12.

Any Course in the State Parks System (Best Deal)

While the rates at Gibson Bay might be lower, the quality of the courses in the Kentucky state park system make any course you play the best deal. With courses all over the state and each designed with great care, you can’t get a better golf experience for you money.

Some of the top courses include the aforementioned Dale Hollow Lake as well as General Burnside Island. But to be honest, all of the states thirteen courses are worth playing. The system features 9 and 18 hole tracks with prices ranging from as low as $15 to as high as $48 depending on the time of day and season.

The Bluegrass State has something for every golfer—from pros to weekend hackers. The gem of the Kentucky golf scene is its extensive state park golf network which features championship golf at low prices. If you get the chance, you can’t go wrong when you golf Kentucky. Happy golfing.