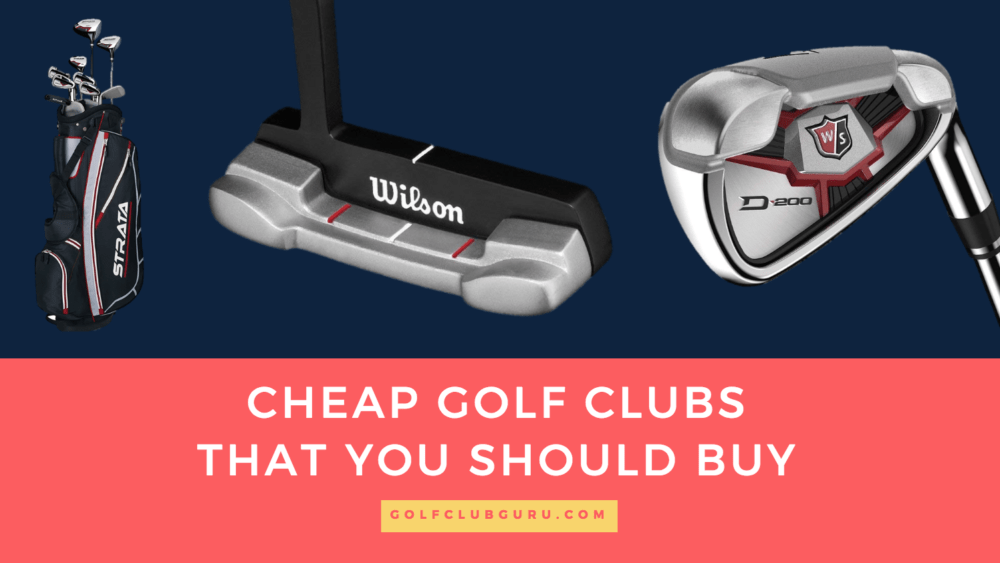 Cheap Golf Clubs That You Should Buy

There are some crappy golf clubs out there. You won’t believe the number of off-brands that produce what they actually consider to be “playable” clubs.

This article is all about the cheapest golf clubs that you can buy without being considered stupid.

You should buy cheap golf clubs if…

You’ll notice that many of the same brands are going to be popping up in the “cheap” articles that I write. That is because you won’t find low budget golf clubs from Titleist or Ping very often.

The really low priced golf clubs will be coming from brands like Wilson, Strata, and PineMeadow. They don’t have huge sponsors, which means that they don’t need to raise their prices like crazy to make up for the multi-million dollar contracts.

Many of these brands have been making clubs for decades. Are the clubs just as good as the premium brands and models? No, but they are close. If you aren’t that good of a golfer anyway, they won’t affect you for a while. You’ll shoot the same anyway, until you really develop a consistent swing and short game.

Alright, let’s get right into the cheap golf clubs!

A complete set will have everything you need. You’ll be ready to play by day one! It will take away a ton of stress and will save you lots of time in the end. If you are looking for cheap clubs to begin with, you won’t be too stringent on quality I’m sure. Cheap complete sets get the job done, and that’s what you want.

The best complete set companies are Wilson and Strata. Strata is my personal favorite complete set brand. They are owned by Callaway, so you know they are making the clubs in a very similar fashion as their more expensive clubs. Their clubs are very durable and, as a whole, the set looks very professional. It looks like it costs way more than $200, that’s for sure!

All of their clubs are decent. No club stands out from the other, from the driver to the putter. Everything will perform just as well as an expensive club if you are new to the game or still not a very good golfer. The clubs won’t matter until you develop your game and become far more consistent. For now, these will do just fine!

You said you wanted cheap. I’ll bring you cheap.

In all seriousness, Pine Meadow is actually a half decent brand. They really focus on the beginner golf market, which is the perfect group to attract for cheap golf clubs.

This driver has “offset”, which is very rare for a driver to have. Most irons, especially for beginners, have offset to improve the impact position and to square the face. The offset, which causes the clubface to be slightly behind in line with the shaft, encourages a more closed face at impact and the hands to be more forward than a non-offset club.

If anything, an offset driver will only help most beginners. So if you are known to slice the ball, especially on drives, consider getting this offset driver.

Let’s be clear. This driver is pretty cheap. If you are looking for a club that will last a few more years and will probably produce more consistent results, click on the tab at the top of the screen for a better value one. However, if you just want to get a decent driver shipped to your house, not caring too much about quality, then this is the driver for you.

Visually, it’s a pretty good looking club. After you get used to the offset appearance, it has a great all-black look to it, which I find attractive in a driver.

Need a 3 wood to go with your driver above? Look no further than the Tec Plus Low Profile 3 wood.

It’s exactly what you came here for… cheap. Will cost you $50 or less on Amazon. It’s similar to a three wood that you would find in a complete set that sells for $200ish total.

The paint job isn’t 100% perfect, but it gets the job done. Besides the imperfect paint job, it’s actually a good looking club at address.

You came here for a low budget golf club, and you got one!

These irons are on the border of cheap and just an INCREDIBLE value. You’ll be spending a little more than $200, but they will be well worth it.

Wilson actually makes great irons. They just don’t have a huge budget to spend on marketing and advertising, so you don’t see many top players playing them. As a result, even beginners don’t think Wilson makes good clubs.

However, they have been making great irons sets for many decades, and so they are currently very undervalued as a golf brand.

I debated whether I should list some borderline off-brand set of irons for this article, but I decided on this higher quality Wilson set instead. If you are really looking to cheap out, I would just get a complete set of clubs for under $200 like I listed above.

However, if you are just looking for some irons, these should be at the top of your list when you are trying to save money.

Very similar to the irons above, Wilson makes some great wedges at a great price. They are known for great budget golf clubs, and they consistently deliver.

This Harmonized golf wedge is very popular among frugal golfers, and for good reason. It will perform relatively close to any wedge on the market. You might be sacrificing feel and distance control by a little bit, but it won’t make a big difference. You will be the one laughing for how much money you’ll save by buying these!

Most cheap wedges are very thick and blocky. However, this wedge is lower profile and very slick. It will cut through some pretty thick rough, as opposed to getting caught up.

Dang, Wilson killed it in the later part of this article. Their Harmonized set is extremely solid for the amount of money they charge. Considering free shipping as well, you are getting an insane deal.

Putter’s don’t vary as much as you might think. As long as you get the ball rolling in the right direction, the putter that you use won’t matter that much. That’s why I’ve never been a fan of spending much money on putters. You could putt with a brick if you had to!

If you are looking for cheap, brand new golf balls, I’d stick with Wilson Ultra 500 Golf Balls. You can get a dozen balls for under $10, and that’s with free shipping!

To be honest, though, if you really want cheap golf balls, you shouldn’t be buying them new. I’d recommend you get your butt in the woods at your local course and search for hard to reach golf balls. Go for the spots that no one else would go to!

Otherwise, I’d go to the best golf website to buy golf balls or Amazon and buy a large lot of balls to last you a while.