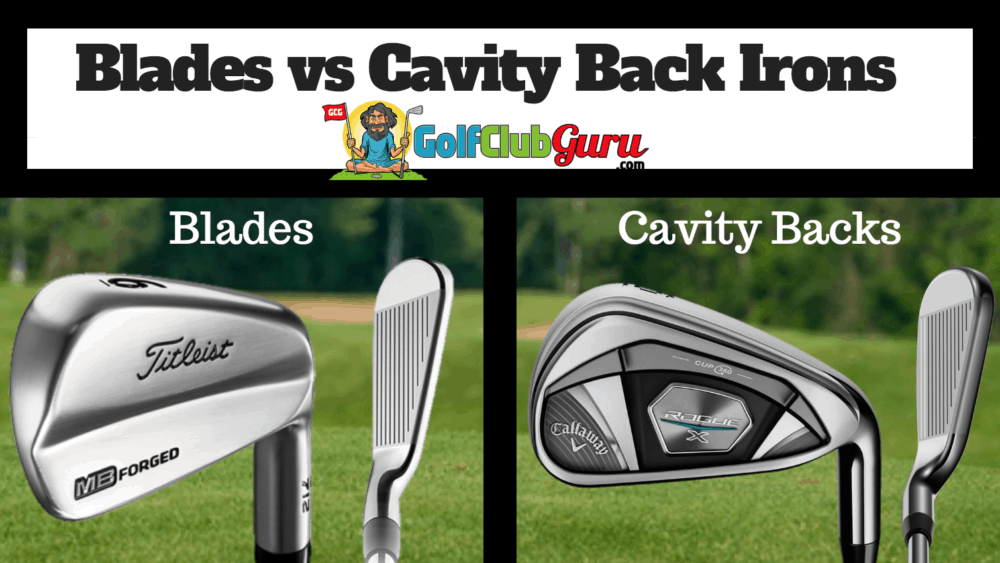 Cavity Back vs Blade Irons – What’s the Difference?

Often times, when a golfer is searching for a new set of irons, they realize that they have to decide between blades and cavity backs. So what’s the difference? Which ones should you play? This is actually a pretty easy decision, so this article won’t be too long. First let’s talk about the differences between the two.

Which ones should you play? Blades or cavity backs?

Play cavity back irons if…

…you want to make golf easier. Golf can be difficult as it is, so it doesn’t make a whole lot of since to play blades unless you can hit the center of the club face on 99% of your shots. If shooting better scores is your goal, odds are, you should be playing cavity back irons. All high and mid handicappers should play cavity back irons, unless they specifically just want better feel/workability/distance control/feedback at the expense of distance and forgiveness.

Because most golfers have trouble hitting enough greens and hitting the dead center of the club face, a cavity back iron will be more forgiving on mishits. Mishit shots will fly further and closer to your target with cavity backs. Mishits on blades will be penalized greatly, not flying very far or straight typically.

…you are a great ballstriker and need more distance control. Many cavity back irons don’t have great distance control, as they are made more for distance and forgiveness. So if you are confident in your ability to hit the center of the clubface, you will reap the benefits of the blades with better distance control. Play blade irons if you simply like the look and feel of a compact blade, even if it means higher scores and less greens hit in regulation. If you like working the ball left and right, you might want to choose a blade, a cavity back are typically meant to fly as straight as possible.

If you want to improve your ball striking as quickly as possible, I often recommend that golfers grab a cheaper set of blade irons to practice with. Once you can hit blades pretty easily and consistently (while having a great time doing it, too!), you can play with any kind of iron. So it’s not a bad idea to practice with blades and then go back to a more forgiving/longer set if you wish.

Here are the best blade irons for ever budget if you are interested!

Super Game Improvement Irons: These irons are meant for new golfers and golfers that want the most forgiveness possible. They are bulkier (thicker top lines and soles) and have a lot of weight behind the club face. They are great for those that have trouble hitting the center of the club face. Off center hits typically fly very similarly to perfectly struck shots. Check out these articles on the best super game improvement irons.

Players Irons: Blades are considered “players irons”, but there are other players irons that are considered cavity backs. These players irons are meant for distance control, feel, and feedback, but they often times have a little bit of perimeter weighting. They are still far more compact than players irons, though, as most golfers with lower handicaps prefer a smaller design at address. Check out these article for the best players irons on the market.