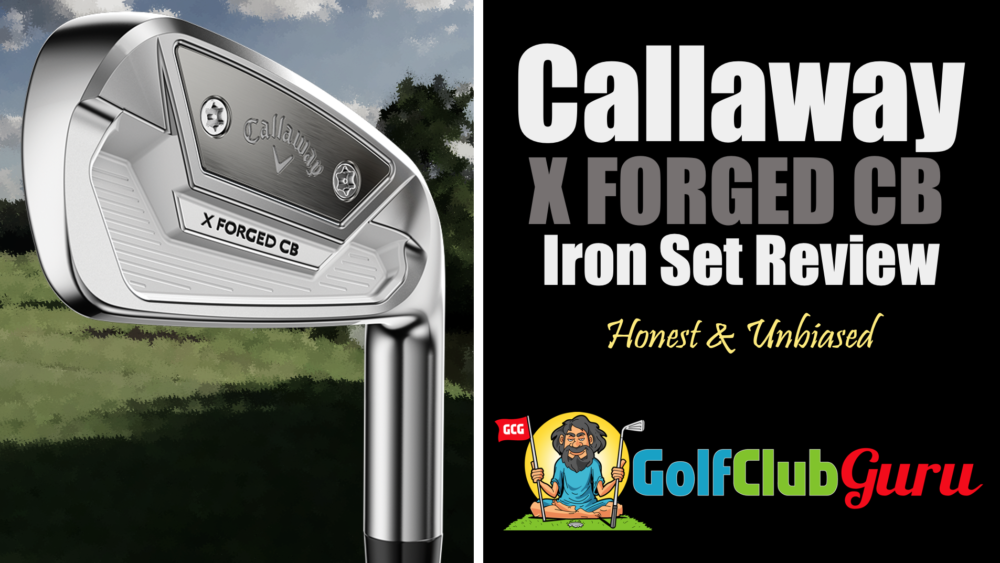 Callaway has already released a few players irons for 2021, like the Apex MB and and Apex Pro. The Callaway X Forged CB irons is a great middle ground between the two. They’ve got the look of the MB but the (relative) forgiveness of the Apex Pro.

Like the Apex MB, the Callaway X Forged CB irons is more tour-focused, but lower handicap golfers and those that look the look of a compact club head are still great target audiences.

Appearance: I’ve always liked the look of CB irons. Very compact look at address, just like their MB brother (muscleback irons). Thin toplines, minimal offset, small club face length. If you aren’t positive that you’ll be able to hit the center of the club face consistently, you don’t want to catch yourself with the Callaway X Forged CB irons in your hands at address.

But, unlike the less forgiving MB irons, the CB irons offer some cavity back perimeter weighting. Essentially, the extra weight behind the club head makes the sweet spot a tad bit larger. You’ll notice the exterior 17g tungsten weighting, which can be adjusted (add or remove up to 5g of weight) to adjust the feel of the clubhead. What you DON’T see is in the internal tungsten weighting that is centered closer to the toe to make the center of gravity perfectly centered (the hosel/shaft add weight towards the heel, so the toe-placed weight offsets that).

Performance: For golfers that can hit the dead center of the club face, they’ll be rewarded with extremely consistent distance control and incredible feel. The forged club head ensures great feel & sound on well struck shots, as well as some feedback on your mishits to get you back on line on the next shot.

But think really hard for a second here…. is that what is most important to you? Distance control and feel? Or are you more interested in distance and forgiveness? Very few golfers would benefit from the Callaway X Forged CB 21 irons to be completely honest.

On off-center hits, you’ll be punished pretty badly by a huge loss of distance, poor feel, and not a great launch in general. Sure, they are more forgiving than the Apex MB, but that’s still not enough for the large majority of golfers.

Who Should Buy The Callaway X Forged CB Irons?

In general, CB type irons like the Callaway X Forged CB irons are best for golfers that want the compact look of muscleback (MB) irons, but still want a marginal amount of forgiveness on their off center hits. After all, MB irons offer practically no forgiveness at all – your score will show it if you have an “off” day with ballstriking. With the CB irons, you’ll atleast get a pinch of forgiveness due to a slightly larger sweet spot.

There’s not many golfers that will benefit from the Callaway X Forged CB irons. It’s definitely marketed towards very low handicap amateurs or tour players. However, it’s worth noting that all golfers can improve their ballstriking (and bonus: experience incredible feel/sound at impact) by gaming these irons. The X Forged CB irons quite literally force you to hit the center of the club face, unlike game improvement irons that fly straight and far even on larger mishits.

If you want an aesthetically pleasing, forged, CB iron set at a lower price, then consider the Titleist 716 CB irons. They are about 5 years old now, but there are tons of great sets on the market with lots of life left. You can get a very slightly used set for around $350, which would save you $1,000+ compared to the Callaway X Forged CB irons.

Both the Titleist 716 CB irons and Callaway X Forged CB irons offer compact profiles, a hint of forgiveness (compared to MB irons), and the indistinguishable control, feel, and sound at impact of a forged iron set. The main difference is price (due to older model and slightly used condition).