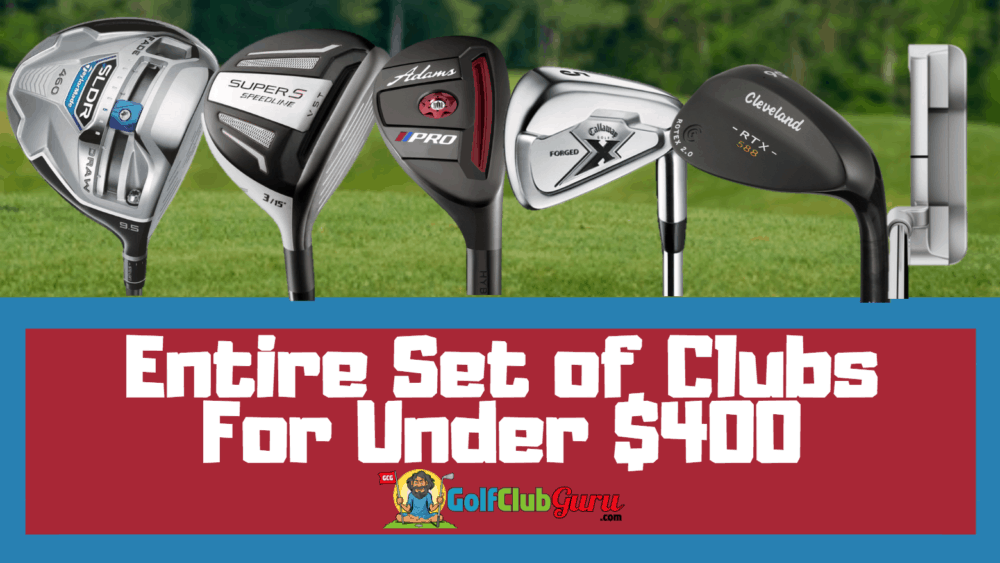 Dang, this is going to be a tough one. There are people buying drivers for $400 plus tax, but you want a complete set of premium clubs for under $400? Beggars (normally) can’t be choosers… however, follow this guide and you’ll end up with a crazy good set of clubs for under $400.

Here is how it works: I’ll go through and do a ton of research and first hand experience. I’ll only pick clubs and use their prices if they have sold multiple times on eBay for that price in the past 3 months. They will only be low budget, high quality golf clubs. I’ll plan out a budget and stick to spending under $400 for the entire set. This was a tough feat even for $500, but I know that we can do it.

A few things to note:

Note that all links/photos that you click on will take you to the respective club available on eBay, by far the best site to buy used golf clubs to get the most bang for your buck.

The TaylorMade SLDR was a hell of a driver when it was released, and it still is! It was the first driver of its kind, with the center of gravity lower and more forward than ever before. Due to that, you could increase the loft of the driver pretty substantially compared to your old gamer. More loft = more forgiveness typically, and many who play the SLDR still think so today. Although it is true that clubs with more loft are easier to hit, the effect is negligible in my opinion. We will take what we can get though, right?

Some other benefits of the design of the driver is that it puts less backspin on the ball. This will lead to a little more distance in the end. Also, mishits low on the face end up flying pretty far as well, compared to most drivers that would send the ball off at a much lower angle.

TaylorMade absolutely flooded the market with the SLDR drivers, resulting in them now selling for super cheap. The club has sold under $50 on eBay MANY times in the past couple of months. This was the most produced driver that the golf industry has ever seen. However, TM golfers are on to the next big thing, so they are selling their SLDRs from a while back to afford the newer clubs. You can take advantage and pick one up for even around $40 if you are patient.

Adams is a great brand for woods and hybrids. They are very underrated in my opinion, and their price tags agree with that. They perform just as well as the premium clubs that are released today, but they sell for 1/3 of the cost. I really like the design of this Adams Speedline Super S fairway wood. On top of that, it makes a great feel at impact (yes, I have hit it multiple times) and flies pretty high compared to what I expected.

The Adams Speedline line, not just the Super S model, is a great line of clubs. They have produced many other similar 3 woods at a similar price. So if you are not crazy about the design of the Super S, consider just looking at other Speedline fairway woods.

I will always recommend Adams hybrids. Always. They sell for crazy low prices and perform excellently. I will probably be an Adams hybrid player for the rest of my life. If you want to spend just $10-$15 more, you can get this club in brand new condition. What a steal for a club that will likely do some much for you and your scores.

Adams Pro hybrids fly high and straight, and that’s all you want. If you are not getting enough air on your current hybrid, or if you don’t have a hybrid yet (gasp!), then you need to look at the Adams Pro hybrids. They look so professional, are very compact yet are forgiving, and sound great when struck. This clubhead is a lot more compact that the typical hybrid club head, which I think is a good thing personally. It is a good blend between a long iron and a traditional hybrid.

I used to struggle pretty badly with long irons before I got my first hybrid. I made the mistake of not getting an Adams hybrid the first time, but I won’t make that mistake again.

Depending on your ballstriking ability or handicap (which are probably related), different irons will fit different people. If you are a weaker ball striker that mishits the ball often, you should opt for game improvement irons like the Callaway X Hot set. They are way more forgiving and easier to hit than players irons. If you are a great golfer and ballstriker specifically, consider getting some forged players irons. They feel incredible at impact, allow you to shape the ball easier, give you more feedback, and have much better distance control.

Callaway X Hot irons are a personal favorite of mine to recommend for newer golfers looking to save some money. They sell for crazy low prices compared to similar models. Callaway has always been a company that focuses largely on distance, and these irons are no different. These irons, at the time they were released, were the longest flying irons ever. The lofts are pretty strong, but the ball speed that the club head design creates is pretty impressive.

If you like hitting all clubs longer, even with your irons, Callaway X Hot irons are a good set for you. This is also an incredible set for seniors, who might struggle hitting the ball as far as they used to. All in all, you can get a set in pretty decent condition for under $150, as it has happened many times in the last few months.

If I was to start golf over again as a beginner, this is the iron set that I would get %100. These irons perform great, fly long, and cost a little.

If you are a better ballstriker, then a forged set of players irons will fit you better. As I mentioned earlier, players irons will offer more feedback, workability, and distance control. Add in forged club heads on top of that and you end up with a great feel and performance.

The cheapest forged players irons on the market right now are Callaway X Forged Irons. They are the precursor to the popular Razr X Forged clubs, which were a huge hit. These clubs are hardly any different at all to the slightly more expensive set, so you might as well save the money and go with the X Forged irons.

Callaway X Forged irons have pretty small club heads compared to most other players irons. For that reason, don’t get these unless you are a great ballstriker who can consistently hit the ball square on the face. Otherwise, you won’t be pleased with the lack of distance on mishits. As you probably know, the distance control is incredible… IF you hit the center of the face. Otherwise, the clubs are not as forgiving. However, at the cost, and considering the fact that they are forged, this is an incredible deal.

Alright, so we have bought all used clubs so far… not anymore though! If I were to buy anything new (and I hardly do), then I would buy new wedges. That way, they will last you for years and years and you can be sure that the grooves are not worn down in any way. Brand new wedges are not a ton more expensive than used wedges anyway. Plus, we have some extra money left over so far, as we have been very frugal up until this point.

My favorite wedge around $50 each is the Cleveland 588 RTX 2.0. It is cheaper than the new release of the 3.0, but they perform practically the same in every way. Wedge technology, mostly when it comes to spin and distance control, hasn’t improved in the slightest in the past 5 years. The USGA keeps a close eye out on wedges to make sure they are conforming and don’t spin crazy amounts.

Considering that you can buy a premium set of wedges for $100, you might as well do it. A used wedge set will probably cost you around $50, so you might as well spend the extra $50 to get clubs that will last you hundreds of rounds and practice sessions.

So we have around $40 left, and that is not a problem at all. Tons of older, brand name putters sell for $40 or less in excellent condition. My budget go-to putters are Odyssey putters. Odyssey has released tons of series of putters over the years, and their older models are slowly being reduced in price as a result.

Some great value series of putters from Odyssey include Dual Force, White Hot, White Ice, White Hot Pro, Tri Force, Versa, and White Hot XG. My favorite Odyssey putter design is the standard #1 putter, which is a blade with a small sightline on the topline, as seen in the picture above. I also really like the #7 mallet design, but it sells for $40 a little less often.

My advice for you would be to look at lots of different Odyssey models and see which one catches your eye. Then buy an older version of that model to try it out for cheaper.