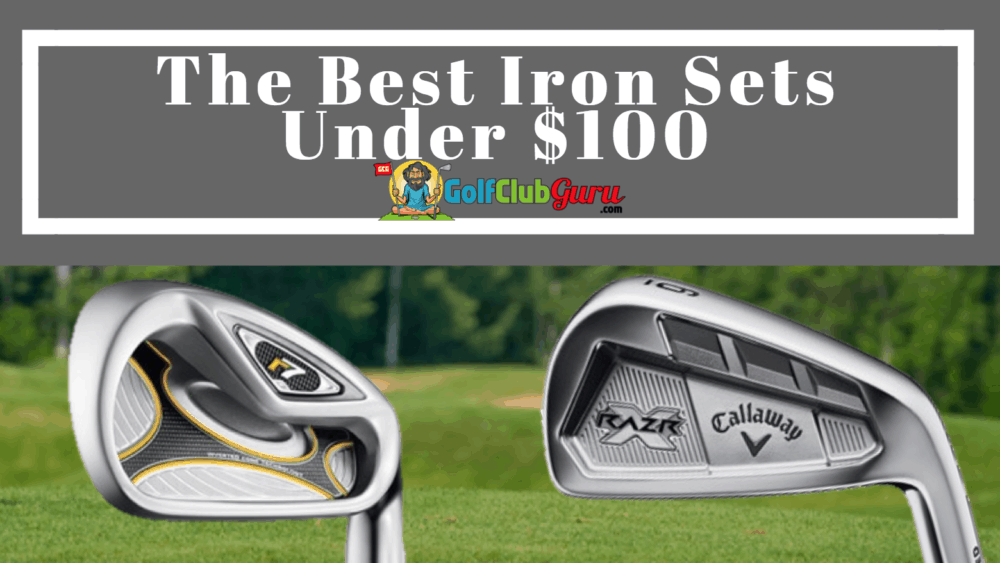 Now, let’s talk about what you can expect to get for under $100:

To be honest with you, those are the only qualifications for irons sets under $100. If an iron set meets those two criteria, there is a good chance that it sells for under the threshold many times every month on eBay.

However, now we have to talk about what iron sets provide the most value for under $100. Otherwise, you might end up getting a super cheap, terrible quality set. You definitely don’t want to do that, as the clubs will break or they won’t perform well in general. If you go that route, you will mostly likely have to end up buying a new set of irons in a couple of years anyway, so you might as well go ahead and get a name brand set.

I’ll split this article up into two different sections: one for the best game improvement irons and one for players irons. Game improvements irons are for beginners and high handicap golfers. If you struggle with ballstriking, these are the types of irons you should be playing with. They are more forgiving and typically a little longer than players irons. Distance control is not very good typically, which isn’t a big problem for newer or lesser skilled golfers. Players irons are typically more focused on distance control. They have smaller top lines, which is a good sign of them being less forgiving. If you are a good ball striker, you’ll want players irons so that you can better dial in your distances. They will also allow you to work the ball a little easier.

Note: all links and pictures that you click on will take you to the respective iron sets on eBay. I’ll get a small commission for everything that you buy using my links, so thank you in advance!!

The TaylorMade R7 irons were an extremely popular set for many years. They were released in 2007, and they end up selling for less than a one hundred dollar bill many times every month on eBay. The standard R7 model is very easy to hit, and they also offer a Tour Preferred model for those looking for better distance control. The standard R7 irons are perfect for beginners trying to learn the game. They are also great for high handicappers looking to improve their ball striking.

TaylorMade has replicated this model of clubs many times after the release of the R7. They have probably released 12 or more different iron models since 2007. With each new release, the price of this set goes down slightly. The great thing is that iron technology really hasn’t improved that much in the past 10 years. Sure irons fly a little further than they did a decade ago, but mostly just because the lofts have been decreased.

This is a great alternative to a best on a budget game improvement iron set (which are all under $200). This TM R7 set is a little older than the iron sets listed in that article, but that means that you can get a set with a little less wear and tear for the same price.

I always get really excited by players irons. I just love the smaller profile heads. I love the distance control. I love the feel at impact. When you are dealing with forged clubs, my excitement reaches a whole different level. This set of Callaway Razr X Forged irons is such an incredible set. The fact that is sells for under $100 in used condition honestly blows my mind. This set sold for around a thousand bucks when it was first released. I love golf deals, and this is one of them. These irons are just like the newer Callaway players irons, so you are essentially saving a ton of money just by using an older set.

Compared to other players irons, the club heads are pretty small. With that being said, I wouldn’t suggest getting these clubs if you aren’t very confident that you can hit the center of the face very consistently. With the forgiveness that you are giving up, you will gain distance control and better feel as a result. Shots feel incredible at impact. You might say that it “feels like butter” when you hit one perfectly. It’s like you are hardly hitting the ball at all.

For under $100, this is potentially the best steal in all of golf. When it comes to condition, you can even pick up a decent looking set for this price, so you don’t have to settle on a set with lots of wear and tear. When I am looking to get my next iron set, this is definitely going to be a top contender.

You might have to wait and find the right set that will sell below $100, but it happens all of the time. Just check the “sold” listings to see how many sets have sold under $100 lately.