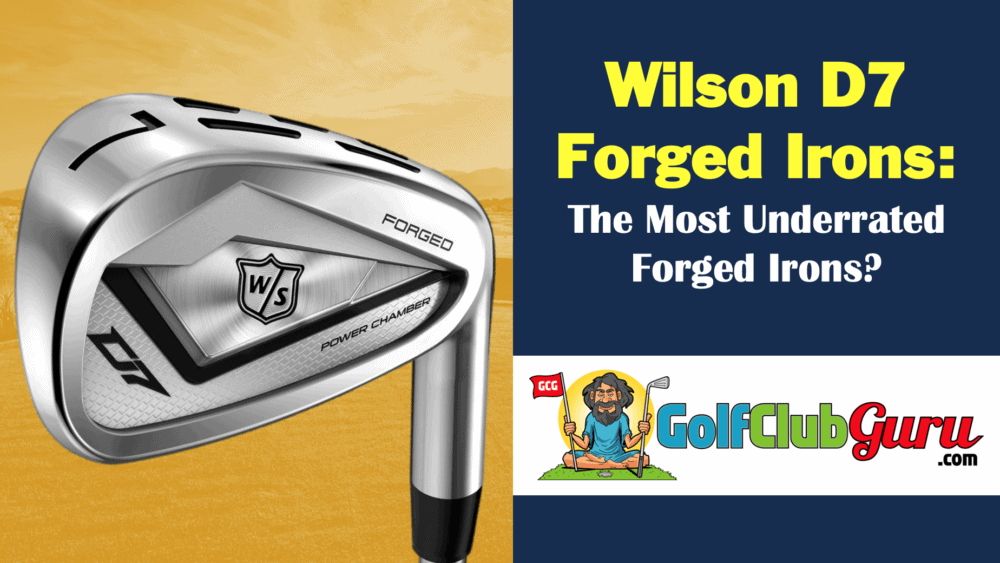 I’ve said it before, and I’ll say it again. Wilson forged iron are the most underrated on the market. People hear Wilson and immediately draw up a thick shield that says: NO, I’M A REAL GOLFER. I DON’T PLAY WILSON. BE GONE! I was once like you. So young and naive. Just kidding, I’m still young and naive.

Come on. You really think you are too good for a specific brand? And do you realize that Wilson used to be the “Titleist” of the industry back in the day, right? I could go on forever about this. I just hope you’ll at least reconsider your immediate bias and give these clubs a try on the range if possible. While you are at it, I’d recommend you go ahead and get a professional fitting done. If you are going to spend good money on a set of irons, they might as well fit you and your swing.

The Wilson D7 Forged irons are an AWESOME set of clubs. Everyone should go and buy the set, right? No, they are not for everyone. If you are wanting to improve your ballstriking and if you have enough money in the budget, they will be a great option. If you’d rather save money (by buying an older forged set or buying a cheaper cast iron set), this is not the set for you. Keep in mind that Wilson has produced MULTIPLE forged iron sets over the past few years that have consistently dropped in price without a resulting decline in performance what so ever.

Anyway, here’s my detailed review of the Wilson D7 Forged irons. Your results may vary, so try them out yourself if possible.

The Wilson D7 irons are absolutely stunning. I love everything about the design except for the holes in the sole of the club. They look a little gimmicky and don’t provide any benefit worth the decline in appearance. Thankfully, they are obviously not visible at address. They call this “Power Hole Technology”, which is possibly the worst name I have ever heard of. I don’t like getting into the gimmicks that golf manufacturers use to try to bring new, naive golfers to their equipment. Just know that there is practically no benefit of those dumb “Power Holes”.

At address, the topline is very small, even for a players iron set like this one. It’s got very small profile club heads, which will be very attractive for better ballstrikers who’d prefer compact over bulky. The toplines are not too small as to scare away medium to high handicap golfers, though.

The feeling of impact with the Wilson D7 irons is wonderful Muted sounds and feel is the goal here, and Wilson definitely delivered. When it comes to feel at impact, forged is everything. Making an iron by using the forging process takes longer and therefore results in more expensive irons. However, the result is better feel (ie. less vibrations through your body) at impact. That may not sound very important to golfers that care more about hitting the ball straight. Trust me: golf is much more enjoyable when you hardly feel the golf ball at impact.

If you are really trying to dial in your distance control, forged irons can only help. The forging process results in less air bubbles throughout the club face and head. Those air bubbles (found more with cast irons) are what creates those shots that fly waaaaaay further or waaaaay shorter than expected with a good golf swing. It’s hard to shoot good scores when you keeping over or undershooting your target by 5-10 yards. Easy to make pars and bogeys, but less likely to be making birdies for sure.

Shafts are more important than you might think. Considering that most golfer buy off the shelf, it’s definitely worth looking into the stock shafts for irons that you are considering purchasing. The Wilson D7 Forged irons come with KBS $ Taper Lite steel shafts. This is a great shaft for tight shot dispersion and decent feel at impact. Those with slower swing speeds (you know who you are) should consider the stock graphite shafts, the True Temper Catalyst 80 shafts.

Price: Not Insane, But Not a Bargain

At just $800, the Wilson D7 Forged irons are at the lower end of the market for a new set of forged players irons. That’s absolutely because Wilson’s advertising budget is far less than the top dogs like Callaway and TaylorMade. Wilson has less overhead, and they can pass some of those savings over to the golfers.

But, like I mentioned early, just because it’s lower than the average set doesn’t mean it’s a bargain. Over the last 3-5 years, Wilson has put out some great forged irons sets that are very comparative to the D7 irons. With each new release, the old models go down in value, thankfully for you.

A great alternative that I’d recommend, if you’d like to stick with the Wilson brand, is the Wilson C300 Forged irons. There were released a couple of years ago, and they are designed nearly the same as the D7 Forged irons. What are the differences? Well, the C300 has more “power holes” (we truly hate that phrase more than anything) and a slightly different paint job. Oh, don’t forget the price tag that is about 50% less than the Wilson D7 Forged irons.

If you are not sold on Wilson irons, consider the Callaway RAZR X Forged irons. Another very popular set of irons when they were first released many years ago. I’d consider the RAZR X forged irons to be one of the first distance players irons on the market, actually. It can be difficult to find a set in great condition, but a little bit of wear on the club face isn’t going to affect performance that much. The savings in price is well worth it. You can pick up a set in decent condition for $200-$250 pretty handily.