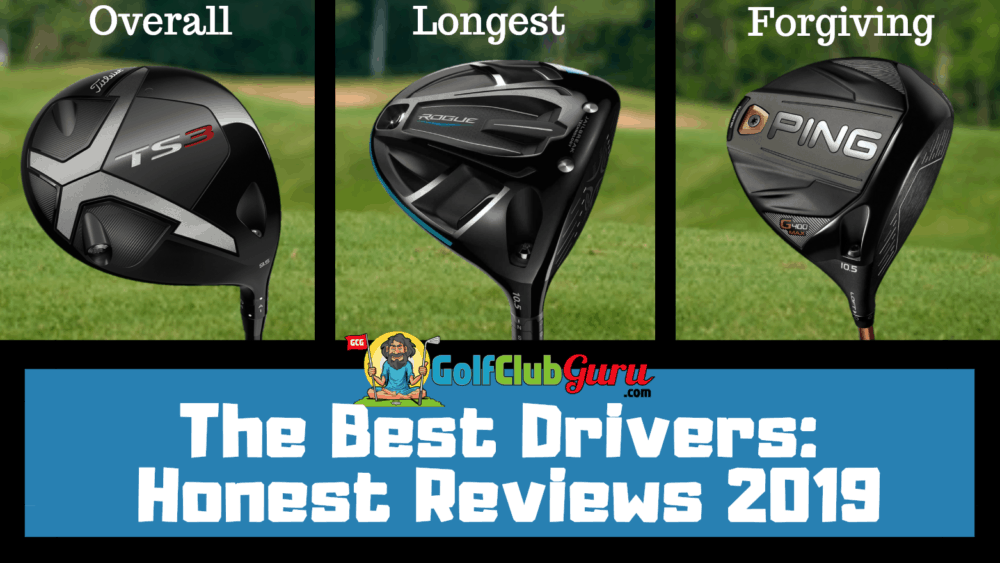 What’s up everyone? I hope y’all are having a great start to the new year.

Just to let you know, all links/pictures in this article will send you to eBay (where I’ll get a commission if you buy anything). Thanks!

A little side note: I’d like to think my website is a little different. I don’t simply push the newest, latest & greatest golf clubs. Why is that? Because clubs a couple of years old are just as good!

Why would I spend $400 on a driver that performs nearly just as good as a $100 one from a couple of years back? Furthermore, why would I buy a brand new driver when the value of that driver will go down significantly after just a couple of shots? Who knows, maybe I am just weird. If you are like me, though, check out my best budget golf club articles. They can save you a TON of money, and you’ll still end up with super well performing golf clubs in good shape.

Anyway, let’s get on to the article.

I’m going to be talking about the best drivers that you can buy in 2019. I’ve tested out all of these drivers, as I’m a total golf club nerd. To be clear: demo days are my go-t0s. The guys that work those things probably hate me. I pick their brains. I hit lots of different shots. It probably looks like I am about to buy each club. Nah, just trying everything out so I can take notes and let everyone know what a random addicted golfer thinks about them.

Let’s start, shall we?

I can’t believe I’m saying this, but I am so proud to. The Titleist TS3 is the best driver that you can buy in 2019. Titleist has had a rough patch for the past 5 years or so when it comes to drivers. They were simply being beat my the competition. They finally hit one of the park here, though.

I love Titleist as a company. They aren’t like TaylorMade and Callaway: they don’t release the same products over and over again with different designs. They are simply dedicated to designing the best performing clubs. When they do so, no matter if it takes them 2 years, they release it. They might release 1 model for every 3 models that TaylorMade releases.

The Titleist TS3 driver is ridiculous. It outperformed my expectations in just about every category. The sound and feel at impact is incredible. It’s like you are hardly hitting the ball at all.

The driver is long. It’s easily the longest driver that Titleist has ever released. Many of the top club reviewers online have seen significant distance increases compared to other Titleist models and compared to the other latest and greatest drivers. That’s not even the good part, though. The good part is just how forgiving it is. I felt like I truly couldn’t miss with this driver… and that’s exactly the club that I need as of late.

I like when companies focus on just one thing. For example, Callaway is all about distance. They want the longest driver. They’ll tell you it’s super forgiving as well, but take that with a grain of salt. They just want you to buy the thing. What they are being honest about is just how far this driver flies.

In a nonexistent survey that I just made up, roughly exactly 112% of golfers say they only care about hitting their drives longer.

If that stat doesn’t tell you everything you need to know, I don’t know what will. People like longer drivers! It’s as easy as that.

I’m not a gimmicky person. They can put 100 “jailbreak” bars in the head, and I wouldn’t care. I don’t care how they generated the ball speed that they did, but I know that they did. Maybe it really is the improved jailbreak bars increasing the ball speeds. Maybe it’s the thin club face. Don’t care, honestly. The ball speeds are simply incredible!

That was a really, really long winded way to say that the Callaway Rogue driver is the longest driver that you can buy for 2019 so far. If that changes, rest assured I will update the article as soon as possible.

Alright, I’ll give you a break here. Clearly, though, you didn’t read the part about the Ping G400 driver, did you?

I said there that it’s a crazy forgiving driver. The Ping G400 MAX driver, though, is even a step up. You literally can’t miss with this driver. If you do still miss, guess what buddy? It’s the indian, not the arrow. The club feels incredibly stable. You always know where the club face is, and that’s a rare quality in a driver.

If you find yourself hitting the ball all over the club face, slicing it sometimes, hooking it other times, this is the driver for you.

No matter where you hit it on the club face, you’ll get a halfway decent result. That’s all that you can ask for when you really fudge up. Don’t be too hard on yourself, though. A driver is just a tough club to hit compared to the rest.

I’ll admit… I was a little torn here. Is this the best driver for forgiveness? For slicers? Overall? It was tough to decide, mostly because there are just so many great performing drivers on the market this year.

In the end, I decided I’d categorize the Ping G410 SFT driver as the best feel/sound at impact. That doesn’t sound like much, but keep it mind it excels in nearly every category that you’d want a driver to excel in.

The SFT technology is great for those that struggle with closing the club face through impact. That’s a probably a majority of golfers if we are being honest.

Aside from the forgiveness, though, the club just feels incredibly quiet at impact. Did I whiff the ball? Nope, just hardly felt it, which is a really cool feeling with a driver.

Definitely hit a few balls with one before you decide which driver you are going to buy. It is a tad expensive, though. Consider buying an older model (even the G400 SFT) if you want to save a little bit of money. Remember: they can’t improve drivers every year. A driver from 5 years ago will still perform nearly just as good as a newly released 2019 model.

Why is it that I feel compelled to list out the best drivers for slicers but not for hookers? Oh, that’s right. Everyone seems to have a hard time closing the club face at impact. Coming way over the top doesn’t help either.

To be fair though, I think you should work on your swing before you buy a club designated to fix your problem. It’s not the clubs fault, it’s yours. But, this club can make it easier to fix that dreaded banana ball.

The best driver for women has to be pink! The industry will not allow a non-pink driver to be popular with women. It just wouldn’t be right!

Just kidding, again. This article is just a steam of crappy jokes and (some) helpful advice on picking the best club for you.

The best driver for women in 2019 is the Cobra F Max Womens Driver. The sweet spot is huge and the ball will fly high and far off the club face. What more do you need?

Well, a lighter club head and club shaft would be nice. Good, because that’s what the Cobra F Max has. Anything else? Yep. How about some offset to make it easier to close the club face? Sure thing!

You might be wondering if it would be better to buy the Callaway Rogue Women’s or the TaylorMade M3/M4. Nah, this Cobra will perform just as good (if not better) for women. Plus, it’s half the price. Cobra is a very undervalued brand, especially when it comes to drivers.

Throughout the year, I’ll be updating this article.

Do you think I missed one? Let me know in the comments below!