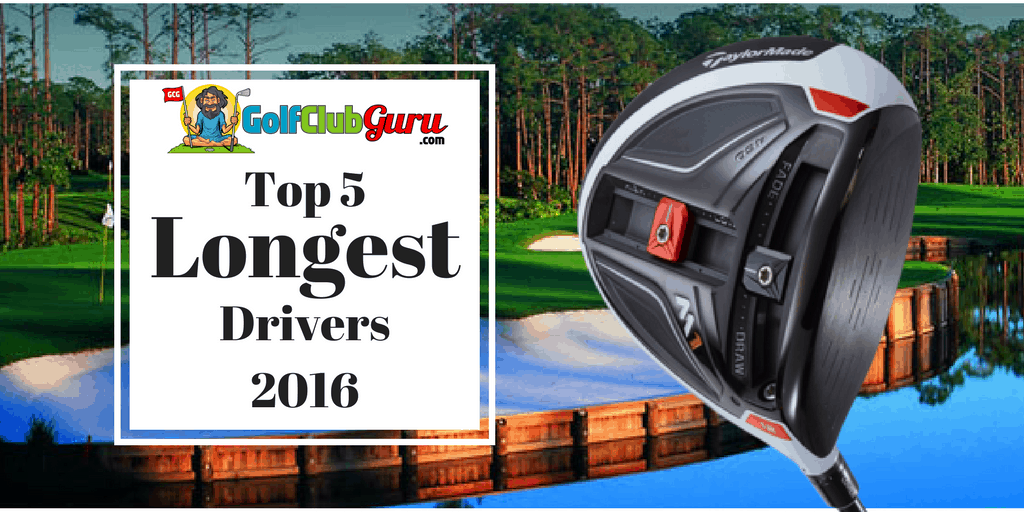 Ah, so you typed in “Longest Driver on a Budget” or something along those lines, and are looking for an expert in the golf industry to tell you the longest driver on the market. Well, search no more, because the Golf Club Guru is here to help! I’ll keep it very simple. Golf club companies throw out a lot of sophisticated words that sound cool, but no one really know what they mean. So what actually makes a driver long?

Note: all links/pictures below, if you click on them, will take you to eBay listings for the respective driver.

So, it’s been a couple of years since I originally wrote this article. I’ve decided to go back and add a few long drivers on a budget. The ones that I originally wrote about are becoming harder and harder to come by, as you might not be able to find the right loft or shaft flex that you want. However, because they are older, you will typically find better deals if you stick with the ones that I posted a few years ago.

Here are a couple new models that you should definitely check out though. They are focused on distance, and they are both a great value at the moment.

Can’t speak more highly of the Callaway Great Big Bertha Epic driver. Super attractive at address & super long off the tee. What more would you want in a driver? I truly think that Callaway makes the best drivers nowadays (especially considering the prices after the clubs have been on the market for a year).

The jail break technology improves ball speeds and forgiveness across the whole face, so it’s long on both center hits and off-center hits. Plus, with the new release of the Rogue drivers, the Epic models have dropped pretty significantly in price.

If you want a super long driver with the latest tech, check out the Callaway GBB Epic!

If you can’t shell out the money for the Callaway Epic driver, check out the earlier model, the Callaway Great Big Bertha driver. It’s lower in price, but won’t travel quite as far as the Epic drivers, especially on mishits.

Next Gen R•MOTO Technology results in a super thin, fast club face to increase ball speeds at impact. For more stability and adjustability, there is a 10g weight on the back of the crown. You can move it closer to the heel for a draw bias, or closer to the toe for a fade bias. You can also use the adjustable hosel for 8 different configurations of loft, lie, and face angle.

If you want a super long driver that is adjustable and even lower priced than the Epic, check out the Callaway Great Big Bertha driver!

With these important features in mind, here are the Top Five Longest Drivers of 2016. The Golf Club Guru guarantees that you cannot go wrong with any of these picks.

Well, looks like it’s time to replace that old driver in the bag that you know has lost some of its “oomph” over time. You know this is special when TaylorMade, a.k.a. “the #1 Driver in Golf,” calls the M1 the longest driver they have ever made. Golfers all over the world praise the TaylorMade M1 consistency, distance, look, and feel. It has got a very large sweet spot, with many mishit balls surprisingly sailing off far and straight down the fairway. I personally have hit 5-10 balls with even the stock shaft, and can wholeheartedly agree that this driver is worth all the commotion it is causing.

Even World #1 Jason Day, one of the best drivers on tour at the moment, can’t contain how much his driving improved once he made the change:

“To be honest, I’m hitting it longer than my R15, which is fantastic,” Jason Day says about the TaylorMade M1. “Just the whole setup, the whole makeup of the driver, with it being a little bit lighter, with the carbon insert on top, … the swing speeds are up because of that. But then on top of it, I’m launching it the same angle, but the down angle coming down to the ground is a lot lower.”

He goes on to say “the spin is a lot lower than my old driver, as well. When you’ve got the same launch angle, carrying a little bit further with a lower down angle and less spin, it’s going to bounce and roll. It’s just a perfect makeup right now.”

TLDR: The Golf Club Guru likes equations, so here’s one for you: a light and adjustable driver head + a large sweet spot + carbon insert + increased swing speed + less spin + being good enough for the best in the world = the longest driver on the market.

With the M1, TaylorMade built a driver that has both incredible distance and feel while allowing adjustability that allows all golfers to fine tune their drivers with the same accuracy as Tour players who have access to TaylorMade’s professional fitters. The most important component is the M1’s lightweight driver head, as it allows additional weight to be put on the driver’ sole to achieve a golfer’s ball flight preferences.

2018 edit: In the picture above, I made a joke about the M3 driver coming out “next month”. Turns out I wasn’t too far off 🙂 haha 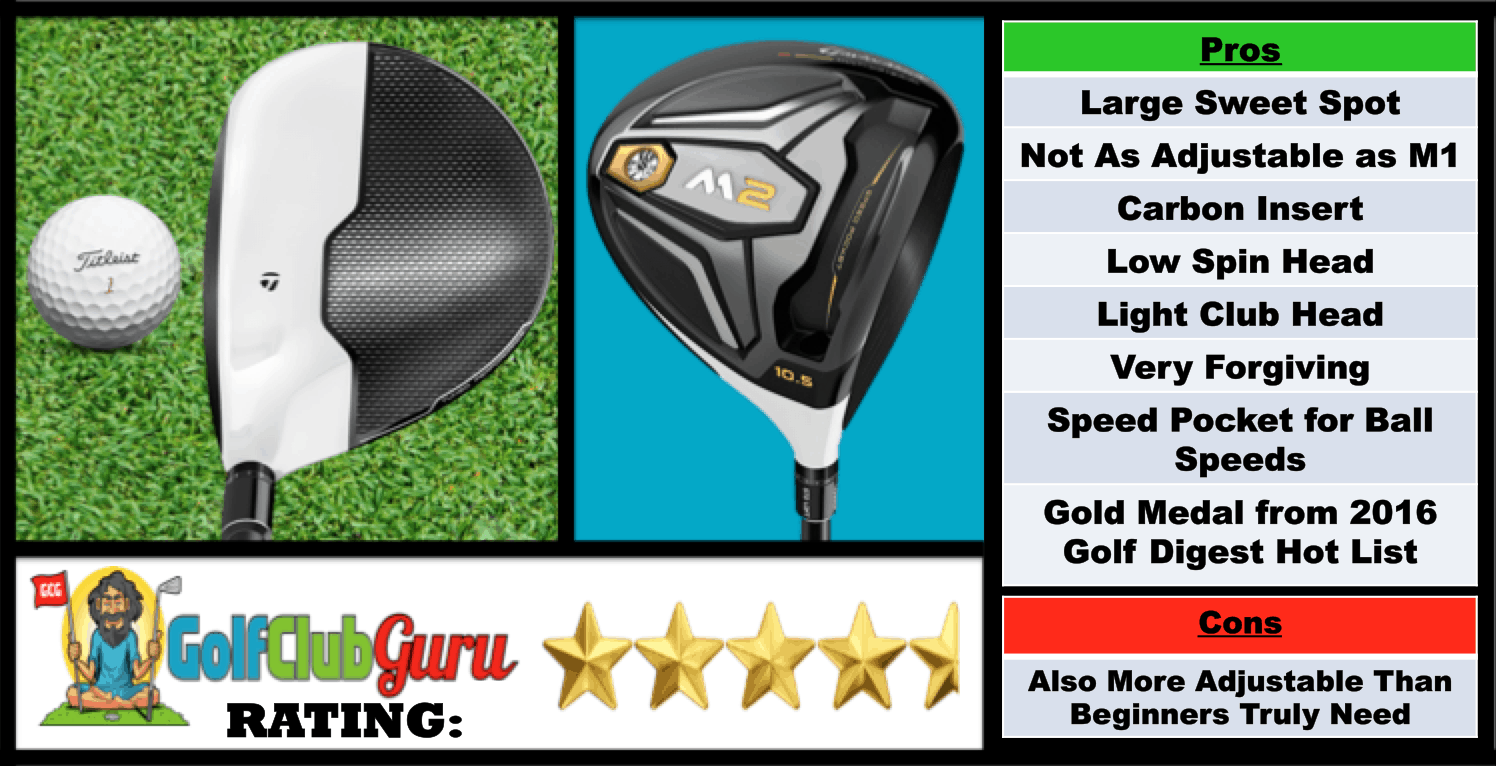 When you really get a hold of one, TaylorMade’s M2 can produce some outrageously long drives, among the longest out. The flat, low spin ball flight created a nice compromise of carry distance and roll, while ball speeds are pretty consistent across a large area on the driver head (in other words, even mishits will impress you with their distance).

Similar to the famous M1 driver, the M2 has a light-weight carbon crown. While the M1 offers adjustability throughout the sole, the M2 moves weight low and rearward (as opposed to close to the face), to improve forgiveness. This increases ball speed on shots hit low on the face, due to the fact that the face insert is thinnest around the edges to keep ball speeds high on mishits.

The TaylorMade M2 has an adjustable hosel: You can increase or decrease loft by up to 2 degrees and can choose from 30 premium shafts, with the Fujikura Pro being stock. TaylorMade’s M2 driver is available in 9.5°, 10.5°, and 12° lofts.

Callaway worked with the aerodynamics team at Boeing to reach previously unseen ball speed with a deeper face. The Callaway XR16 Pro offers a high head speed design, low drag, and a 450cc head. How did they do this? Well, they pinpointed the size and re-engineered the shape with a lighter Speed-Step Crown to decrease weight (less weight = more ball speed = more distance). With lower spin and a low and deep Center of Gravity bias, the XR 16 Pro is built for the distance that all golfers are searching for.

On top of the distance that this driver offers, it also has the forgiveness that lower handicaps can benefit from. That’s what happens when they added Moment of Inertia, increase the size of the head, and made the Center of Gravity lower and deeper. These changes lead to increased ball speed at every impact location on the club face, directly increasing the distance golfers can hit off the tee.

With the XR 16 Pro, Callaway stepped up their game with new “R•MOTO Face Technology,” which is lighter and thinner to improve ball speed all across the face. When you have high forgiveness and a faster driver face, you can pick up a lot of ball speed, regardless of where you hit it on the face! This driver is available in 9° and 10.5° lofts. 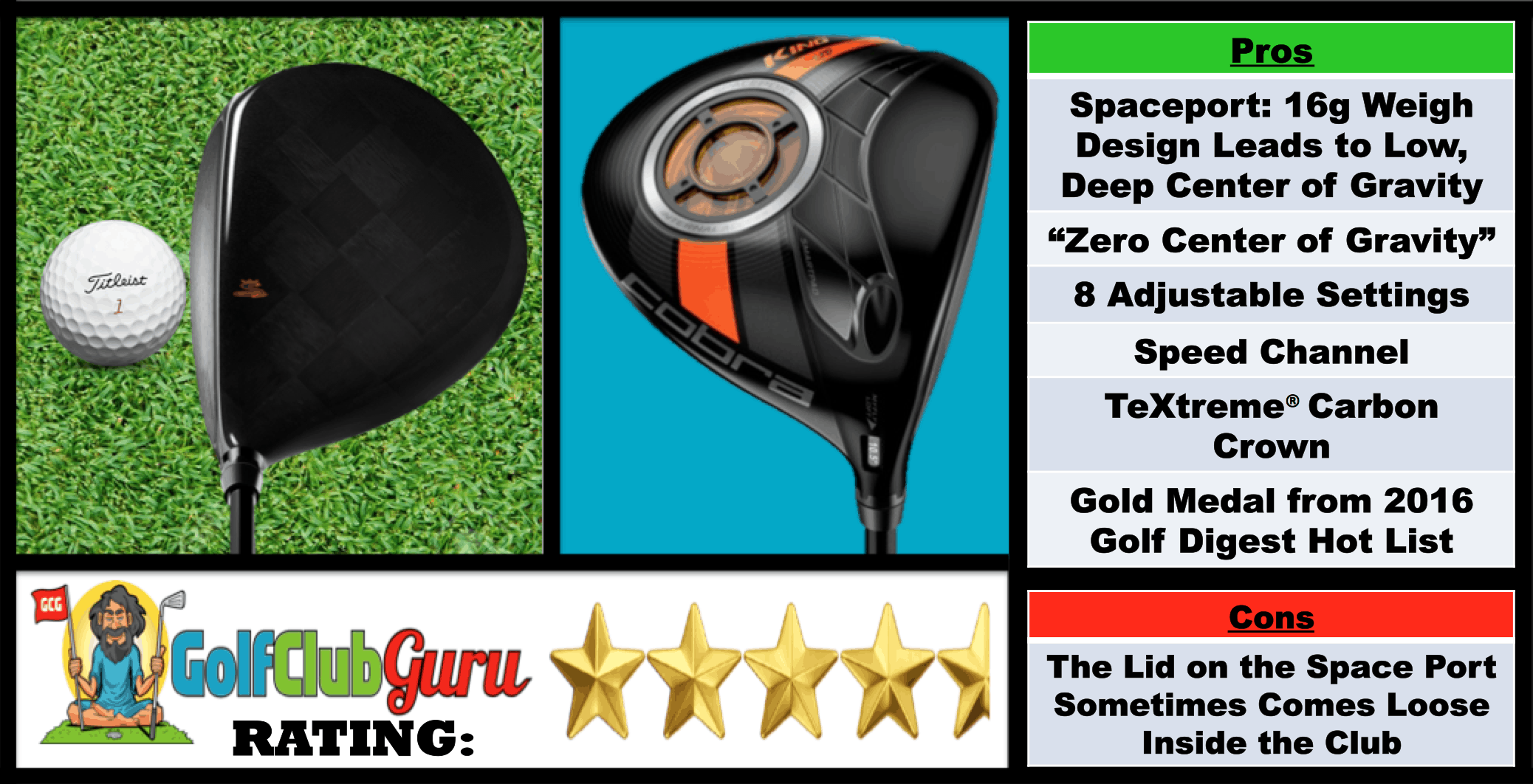 A 16g weight strategically moves weight low and deep in the head, making a very low center of gravity (CoG) with high Moment of Inertia. These two qualities are idea for delivering maximum distance with no sacrifices in forgiveness. The multi-material “Spaceport” design acts like a window with a removable cover, so for the first time golfers can literally see all the internal Cobra technologies that make this their best driver yet.

A re-designed “Forged 8-1-1 Titanium E9 Face” is a varying thickness design that is lighter and thinner (leading to increased distance) and hotter creating more deflection for faster ball speeds and a larger sweet zone across the face. The “Speed Channel” is a Cobra-exclusive design. An engineered trench along the outside of the face decreases thickness and therefore improves ball speeds all across the face for crazy distance.

The Cobra King LTD Driver has 8 easily adjustable loft settings to fine tune trajectory and dial in launch conditions to maximize distance for any swing speed.

The Ping G LS Tec (short for Low-Spin Technology) has a center of Gravity that is extremely low, along with a “high launch-angle-to-spin ratio” built for the golfer who wants low spin and forgiveness (this would be everybody… ever). Inspired by a technique called biomimicry, PING engineers used the dragonfly’s complicated wing design to create thin crown sections for low CG and increased MOI, resulting in their longest, most forgiving driver ever made. This is the lowest, deepest CG of any Ping driver, and it shows by generating more distance.

According to their website, “Vortec Technology on the back of the Ti 8-1-1 head minimizes turbulent wake during the downswing for faster clubhead speed with stability and forgiveness”. Crown turbulators and Vortec Technologies decrease drag 37% through impact, resulting in measurable distance gains with all swing speeds. The varying-thickness T9S face has a large strength-to-weight ratio, resulting in a further increase in ball speed.

To dial in your launch conditions before a round, change the loft of your Ping G LS Tec ±1° using Trajectory Tuning 2.0, which uses a lightweight, aerodynamic and strong 7075 aluminum hosel sleeve.