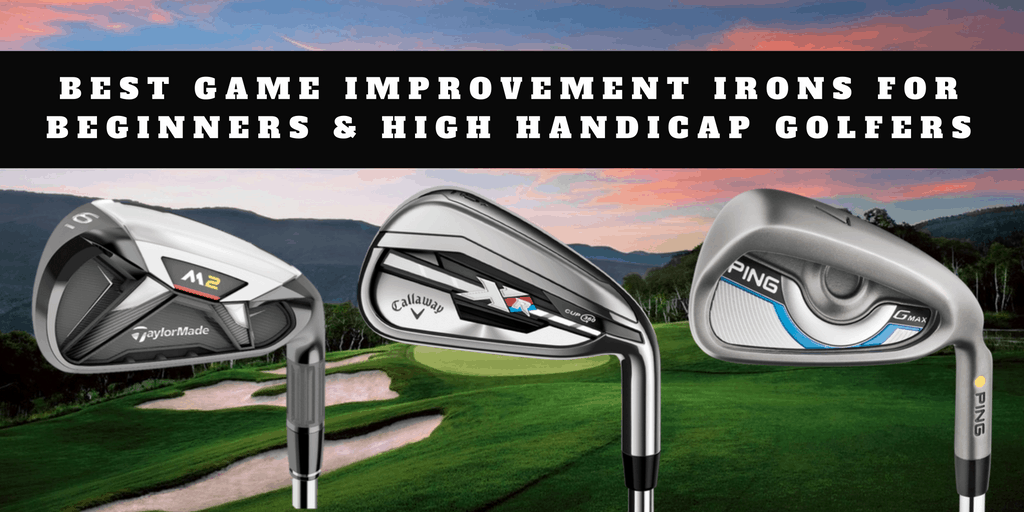 Note: See the 2018 update at the bottom of this article.

These are chunky, unattractive irons that are the most forgiving that you could ever wish for. Miss the center of the club face by an inch and you will be just fine. Distance control and feel are at the bottom of the totem pole, with distance and forgiveness at the top. There is practically no work ability in super game improvement irons, meaning that it is very difficult to curve the ball from left to right and vice versa. Feel and Feedback on mishits are basically nonexistent as well, making it difficult to know where you mishit it. There are all benefits for beginners though, as most just want to hit it straight and don’t care about workability, feel, and feedback. These are perfect for brand new golfers and beginner golfers.

These have slightly larger club heads that have moderate feel, distance, control, work ability, feedback, and forgiveness. Practically every characteristic is right in the middle ground, in between super GI irons and players irons. These are perfect for skill levels from beginners to high handicappers.

3. Most difficult to hit: Players Irons

Players irons have thinner club heads and therefore are less forgiving. They prioritize distance control, workabiliy, feedback, and feel. It’s much easier to work the ball left to right. It’s also much easier to get feedback on your mishits. If you don’t catch it well, you will know it! Distance control is an idea that most people forget about, but it plays a large part in successful ball striking. Players irons are very consistent. If you hit it how you want to, it will typically go as far as you were expecting. The same isn’t true with other irons (they are pretty unpredictable, as well hit shots can often go ~10 yards further than expected).

So, if you have determined that you would prefer a set of game improvement irons, here are my top picks of 2016. Per usual, I have hit all of these clubs in the past, with notes included, as I knew I would eventually write about many of them. Additionally, I have read hundreds of reviews of these clubs and have tried to gather the best mix of information to make your purchase decision a little bit easier. Without further ado, the #1 overall GI iron for beginners and high handicap golfers are the… 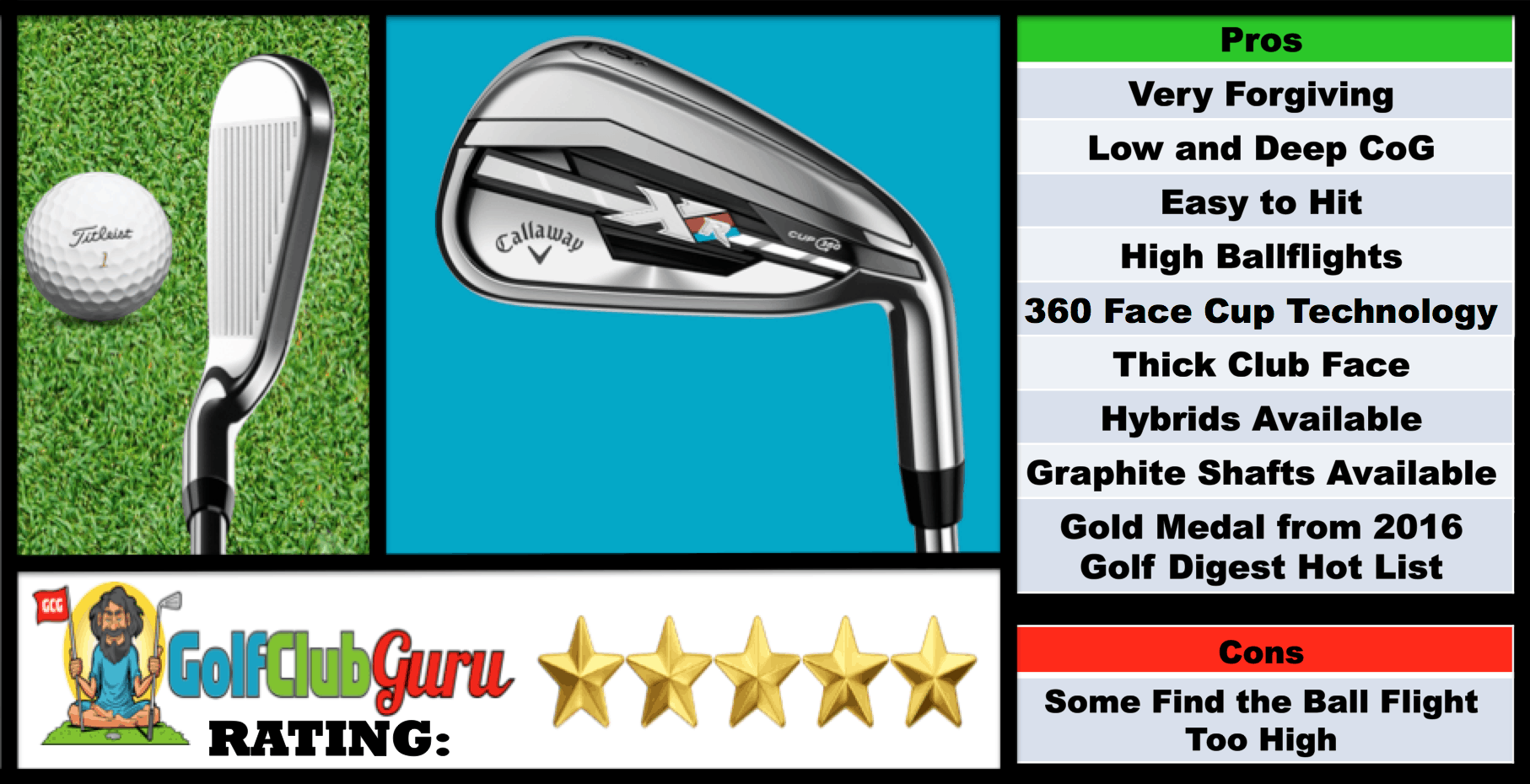 I’m going to have to continue the theme of a “happy medium” here. If a happy medium is what you want, then the Callaway XR irons are your best bet. They are the perfect mix of every quality you are looking for in a set of irons. Distance? Great. Forgiveness? Great. Control? You get the idea.

Let’s talk about some of the features of this set for a second:

TL/DR: Want a well rounded iron set? One that above average in distance, has great control, and is very forgiving? Great, then the Callaway XR irons are for you! They are my #1 iron pick for beginners and high handicaps. 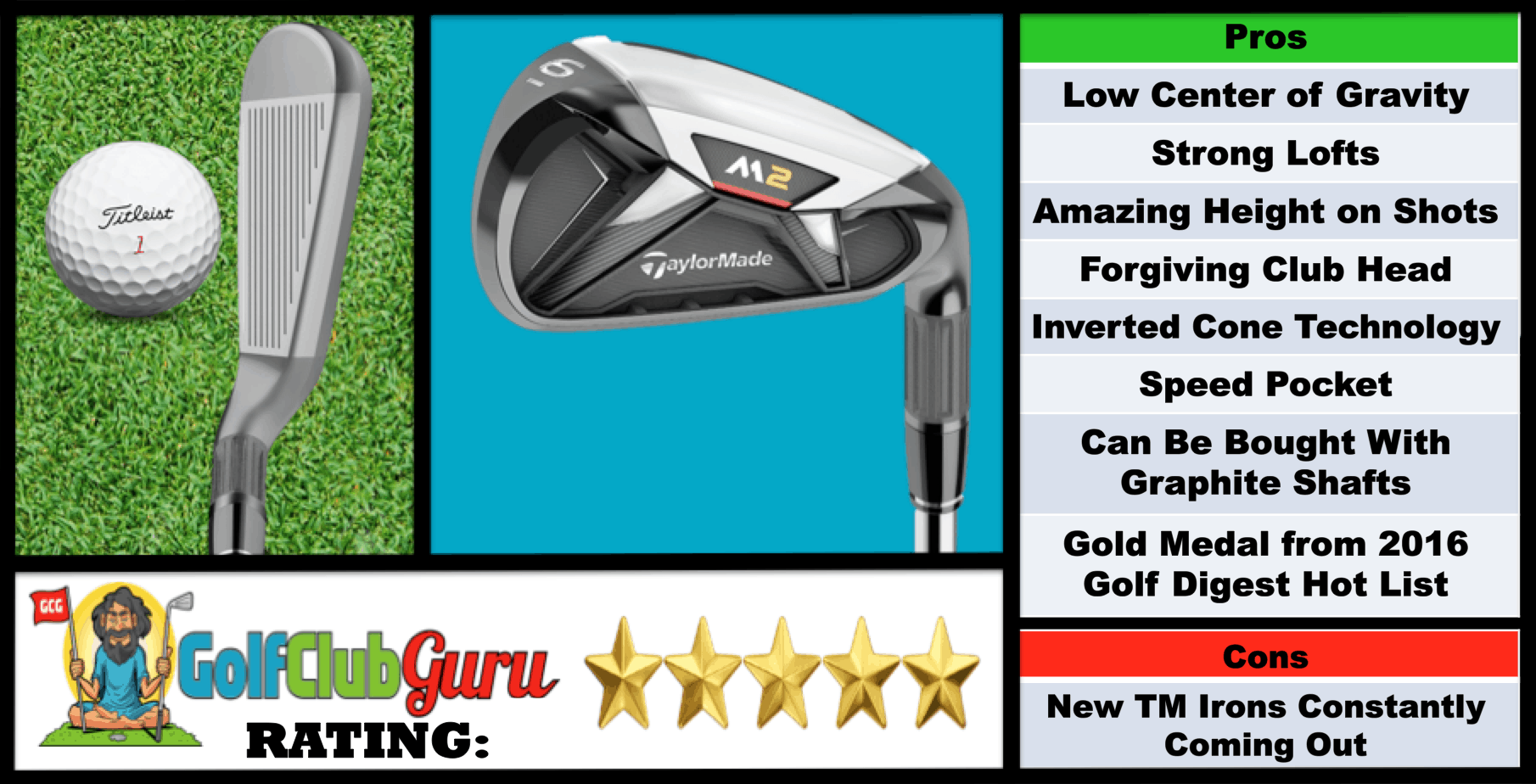 We all know someone that cares more about how far they hit their 7 iron than what score they end up shooting at the end of the day. Oh wait, that’s you? Then you should consider the TaylorMade M2 irons, because that’s all TM really cared about when making this set. With their typical strong lofts and low centers of gravity, you can rest assured that anything caught on the face of this club is going to maximize the distance of your shots. Warning: if you buy this set, you are practically forgoing any sort of distance control, as they have been known to be hard to dial in distances.

Also, with new products coming out all of the time from TaylorMade, this set will probably lose it’s value in a couple of years. Buuuuut, getting back to the benefits, this club is nearly guaranteed to increase the height and distance of your iron shots.  A couple of the technologies that contribute to the distance increase are the speed pocket and inverted cone technology. The speed pocket aids in the rebound effect at impact, while the inverted cone technology improves ball speeds across the entire face (similar to the 360 face cup from Callaway). The last benefit of this club was that it was actually very appealing at address. I love the stark contrast of the colors to really make the club face stand out and make it easier to line up. Not a huge advantage, but it’s always nice to look down at an appealing club before committing to a swing. 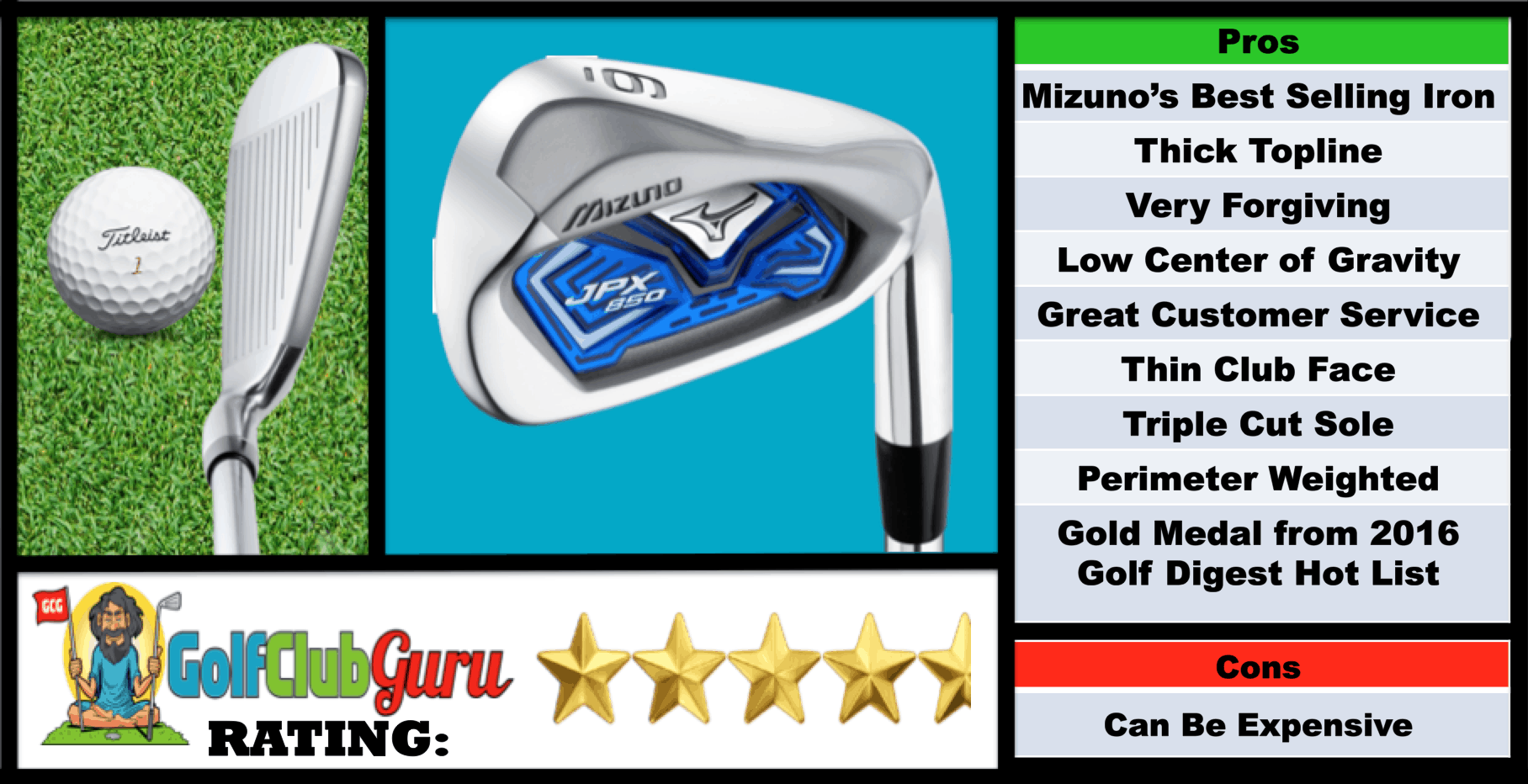 If you are looking for a club that prioritizes feel, then the Mizuno JPX 850 irons are going to be hard to beat. They are one of the few clubs that I have hit that have both a solid feel at impact but also a larger topline. Typically, those two characteristics will be independent of each other. Making contact on the sweet spot with this set felt “like butter” you might say, which is a feeling that you hardly forget in golf. These clubs are not forged, but they sure do feel like it.

Aside from the incredible feel of this club, it also performs very well in both distance and forgiveness. These two features should be priorities for beginners and high handicappers. 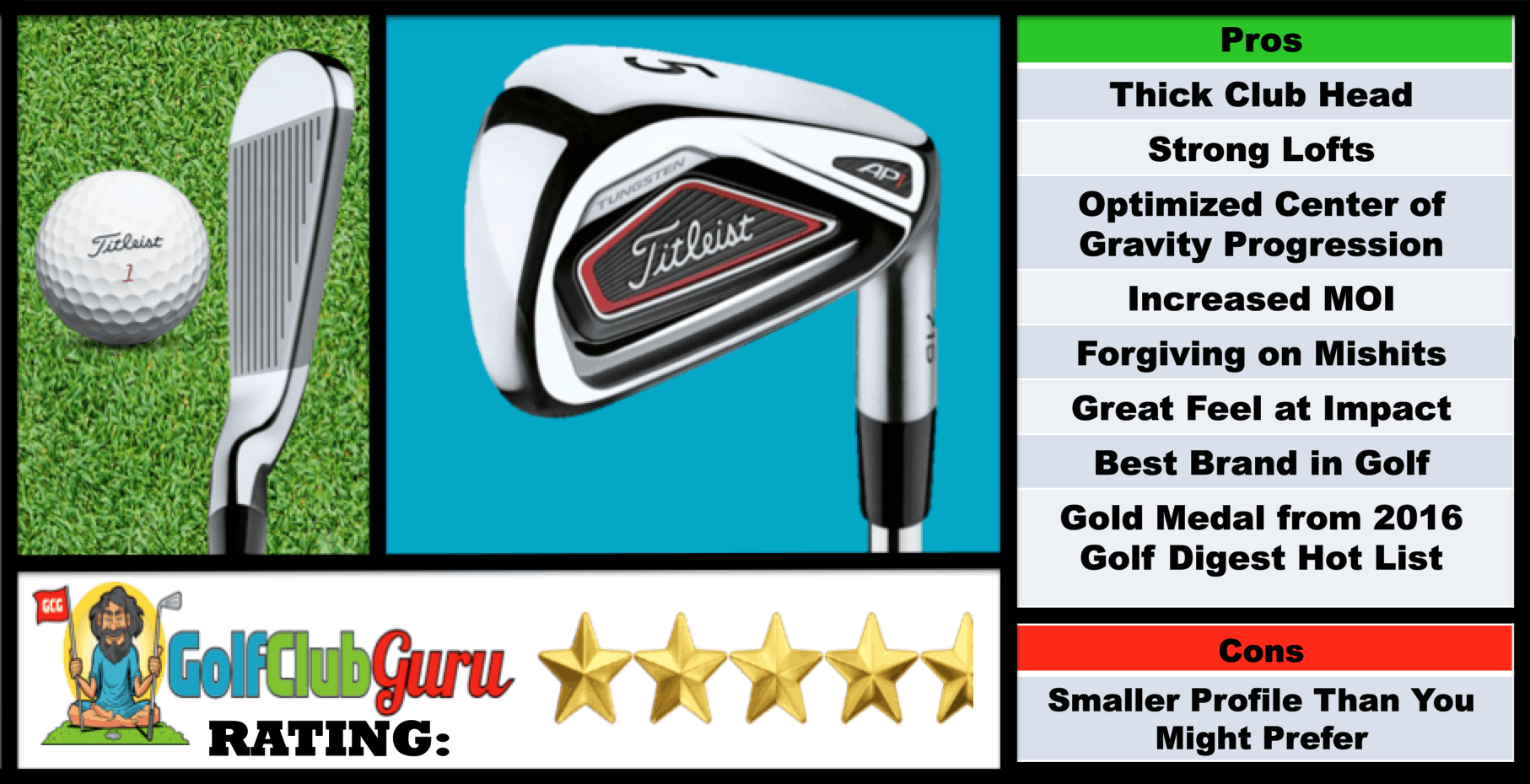 Distance control, as I talked about earlier in the preview of this article, is an often forgotten topic. If you want to shoot good scores, you’ve got to control your distances to at least within 5 yards on your iron shots. Otherwise, you won’t make many birdies and will be struggling for pars most of the day.

With that being said, Titleist 716 AP1 irons have incredible distance control. If you catch the ball how you wanted to, odds are the result will be just as you hoped. You won’t be catching many outrageous fliers as you might have before. It is one of the most frustrating things to catch a ball “too well”, resulting in a shot 10-15 yards straight over the flag.

Along with the consistency of the AP1’s, they are also pretty forgiving and have average feel at impact. The optimized centers of gravity encourage penetrating ball flights with your shorter irons and higher ball flights with the longer irons. The one downside of these clubs is that the top lines might be thinner than you would like. You might prefer a thicker one, like the first three clubs mentioned, which gives a better feeling of forgiveness at address.

It’s been about two years since I wrote this article originally. Let’s talk about the best irons for high handicappers and beginners that you can buy today!

The Callaway Rogue X irons are the longest irons that have ever been produced. They are very strong lofted, but they are designed to hit the ball as high as possible. That combination leads to super long irons shots, which most beginners and high handicappers are looking for. I still remember when I was focused purely on hitting the ball as long as possible, and I have no regrets as more clubhead speed and long shots make golf easier once you eventually decide to focus on more control.

There are three technologies in this set of irons (no need to get into them honestly) that ensure maximal balls speeds. Maximal ball speeds basically means that that the ball shoots off the club face at the highest speeds possible, and it mostly has to do with how thin the face is and how much the face flexes at impact.

Distance aside, these clubs are super forgiving as well. They are oversized compared to the typical iron set, and their sweets spots are pretty large. Even off center strikes will end up decently on average.

Cleveland Launcher CBX irons are one of the most underrated and undervalued sets that I’ve ever seen. These clubs feel great at impact, especially for a cast set. Distance and distance control are pretty top notch. Pairing those with great forgiveness across the entire face leads to an incredible set of irons for high handicappers and those that struggle with ball striking.

If I were to buy a new set today, the Cleveland Launcher CBX irons would be the ones that I would get. I got to demo these a couple of months ago, and I was blown away by their performance. Cleveland isn’t known for their irons by any means, but this set will perform as well as any other for a fraction of the price!

If you are on a tight budget, I would start your search at the Wilson C300 irons. Wilson irons are always at the bottom of the spectrum when it comes to prices, but the clubs perform nearly as good as the higher end options. The clubs won’t travel as far as the Rogue X irons, but that is partly because the lofts are not as strong. The feel of these irons, according to the reviews that I have read online, are pretty great for the price that you pay. That’s surprising to hear, as most GI irons are focused more on distance as opposed to feel/feedback.

Wilson iron club faces are pretty thin, and they flex a good bit at impact resulting in high ball speeds off the faces. The perimeter weighting improved forgiveness and ball speeds across a larger portion of the club face, perfect for beginners that struggle with hitting the center of the face on a consistent basis.