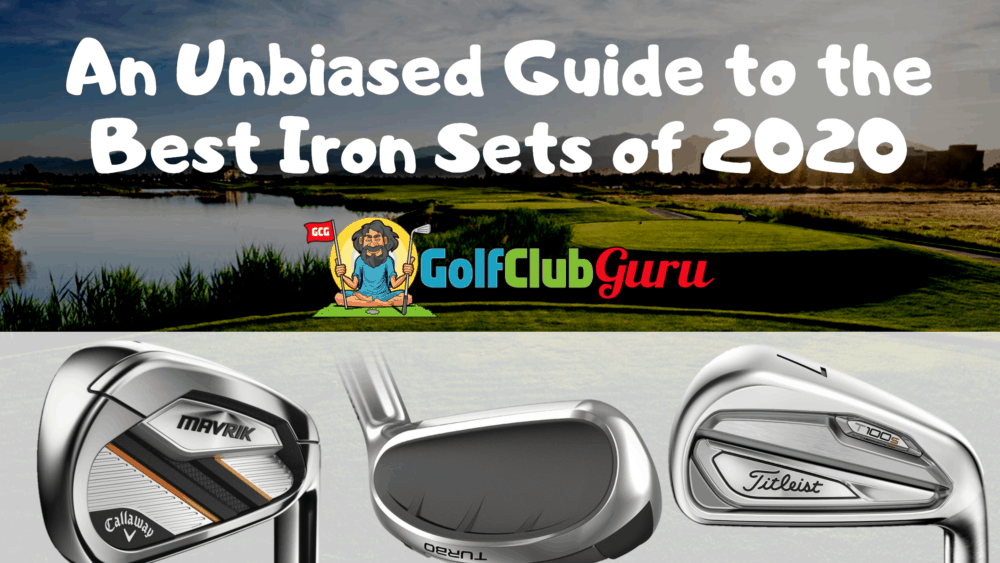 An Unbiased Guide to the Best Iron Sets 2020

I’ll be honest. I’m tired of all of the marketing schemes going on. It’s getting ridiculous, and it’s time for others to be enlightened.

The truth? Golf clubs haven’t changed all that much. Irons made 3-4 years ago are just as good as the ones released in 2020. So why are we even writing about the best golf iron sets in 2020? To rank higher on Google, to be honest. That would mean that more people will read out articles and HOPEFULLY see that the golf equipment industry is kinda scammy.

Our recommendation is to look at the best golf clubs from a few years back. If they were good then, they are good now.

Now to the bulk of this article. We’re going to talk about the hottest releases of 2020, and then mention some better budget options that are just as good at a fraction of the price.

With words like “Launcher” and “Turbo”, you know this set has got to be for long hitters. Just kidding. It’s actually a really clunky set that’s meant to be as forgiving as possible. If you have trouble hitting the center of the club face consistently, the Cleveland Launcher HB4 Turbo irons are a great new set. Especially if you don’t give a crap about what your friends think. Yes, they will judge you.

The long irons in this set are made to be as forgiving and high launching as humanly possible. Higher launch = less spin = straighter shots. It’s that simple. If you can’t hit these long irons high and straight, you probably just suck at golf. Don’t worry… most people do.

The shorter irons are much more compact, which is more attractive for most golfers and gives you a little more control (only on square strikes.. sorry).

At $128/club, you’ll probably go broke if you bought this set. If you wouldn’t go broke, you need to share your wealth. I gladly accept new wedges and putters for my personal collection. Thanks.

Due to the price, I’d strongly recommend you look at similar sets that were manufactured 3+ years ago. This set is no better than the older Cleveland Launcher HB set.

If you want a lower priced option for a super game improvement iron set, check out the Cleveland Launcher HB irons. They were made in 2017, and you can pick up a set in great condition for well under $500.

Just like the HB4 Turbo Launcher set, the forgiveness of the irons increases as the loft decreases. There is pretty much no reason to buy the Turbo set, because the Launcher HB set is the same thing but with a (barely) different paint job. Don’t fall for the hype of the new releases. Save your money instead.

What? Callaway released another set of irons with a new made up name? No, I don’t believe it!

Callaway is a great company. They make great irons year after year. How do do they do that so consistently? Well, they just keep on making the same club every year and simply change the paint job. They really are such creative artists. I couldn’t come up with that many designs in such a short time period. Incredible, really.

The Callaway Mavrik iron set is just like any other game improvement irons Callaway has made recently. They are bulky irons with a focus on forgiveness and distance. Thick toplines and wide soles add to the forgiveness factor, while strong lofts and low centers of gravity help launch the ball high and far (and straight if you know what you are doing).

You can’t blame Callaway. How are they going to consistently make money without burning and churning irons sets multiple times a year. Just because I don’t blame them doesn’t mean you have to be a part of the problem, though. Choose an older set. Save your money…. hell, spend the money on lessons, not expensive new golf clubs.

Price is actually reasonable at $800. Reasonable… only if you are rich and really dislike the feel and smell of money. A better option is to buy a slightly used set that isn’t a new release.

Like I said, these Callaway iron sets are all the same. Stop kidding yourself.  Save your money and pick up this older XR set as compared to the new Mavrik irons.

The XR series was a huge hit four years ago, and nothing has changed except your perception of clubs that aren’t HOT 2020 NEW RELEASE MUST SEE MUST BUY NOW. Get over yourself. This XR iron set won’t travel any less far and isn’t any less forgiving than the new iron sets released this year.

You can pick up a slightly used Callaway XR iron set for less than $400. That’d be half the price of the Mavrik model. Just saved you $400. I won’t charge you a dime for it, though.

Yep, Titleist is focusing more of its time and resources on creating the best performing irons sets. They’ve always made good irons, but they haven’t had an industry changing iron set since the first few releases of the AP2 iron sets back in 2010. Their T series of irons is potentially going to end the plague for Titleist.

If you aren’t a decent ballstriker, this set will make you one. How? Because this club will punish you if you miss the center of the face. Keep practicing with it and you’ll eventually improve your ballstriking.

If you are a decent ballstriker, this set will reward you with great distance control and the great feel of a forged iron. The sleek profile is an added bonus.

Sure, this set is great. It’s Titleist. It’s new. I get it. But don’t empty your wallets without realizing that there are similar options for a fraction of the price.

AP2 irons, depending on who you ask, have been one of the hottest players irons for the last decade. Like I mentioned before, they are just an all-around great iron. Not the best in any specific category, but near the top of EVERY category (distance, feel, durability, distance control).

Players distance irons are capitalizing on the high ego, I-want-to-hit-my-7-iron-200 yards attitude of tons of golfers. I get it. Again, I don’t blame you. I just like being painfully obvious.

Golfers want to hit golf balls longer. Doesn’t matter the club. Doesn’t matter what loft the iron is. All that matters is the number on the bottom of the club, so you can show your friends when you fly the green on a 175 yard hole with a 8 iron. “Man, I really should have passed on that last bicep workout. Haha.” Shut up Chad. You’ve tripled two of the last 3 holes.

The Titleist T100 S irons are the hottest players distance irons. Take everything I said about the T100, and now just add a few yards. That’s basically all that’s happening here. They made the lofts stronger, and then adjusted the bounce & center of gravity so that you aren’t just hitting stingers with your 9 iron.

Don’t let them fool you. The “S” is for sexy, as that’s what every cart girl is going to think you are when they see you smashing your 4 iron 220 yards (into the hazard).

Prices start at about $900. Assuming you don’t have that much money, consider reading the next section for a better value option that will perform nearly just as well. Your other option is to sell your organs or useless body parts (who needs a liver anyway?).

If you are looking for a good value, long, players iron, check out Callaway X Forged Irons. They made X-Forged sets 11 years ago, 7 years ago, and also 2 years ago. I’d recommend the older sets, as they are just as good and much easier to afford.

I won’t lie to you: this set has pretty small sweet spots. When hit dead on the nails, though, you’re rewarded with incredible distance, feel, and control. I can guarantee you’ll develop into a better ball striker if you commit to a sleek, compact set like this one.

Well… That’s enough ranting for one day. Don’t agree with something I said? Let me know in the comments below. I’d genuinely like to hear your thoughts, even when you are wrong.