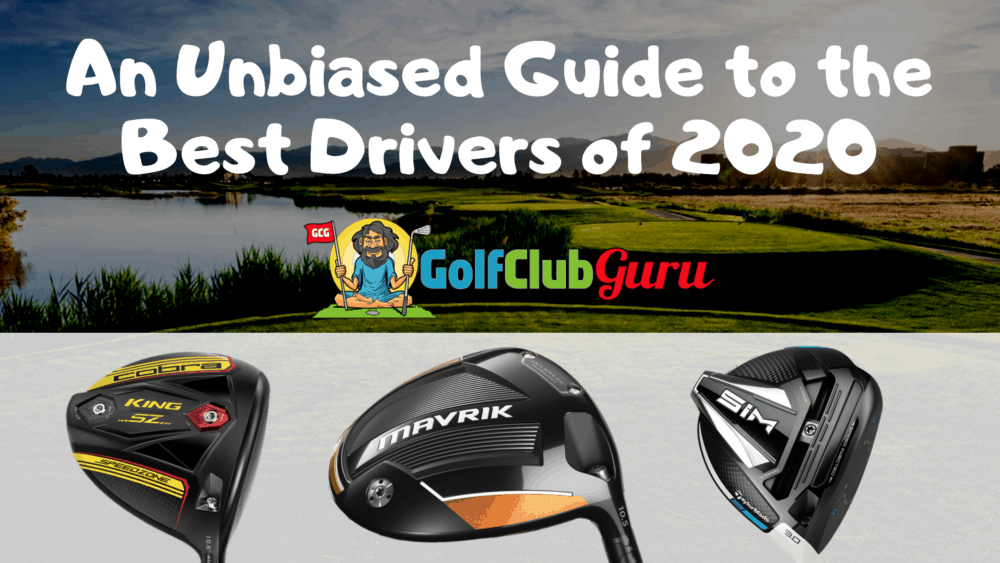 An Unbiased Guide to the Best Drivers of 2020

Are you ready to gain TWENTY EIGHT and a half YARDS on your drive? Do you want to finally hit your first 500 mile drive? Oh, and you are about to NEVER MISS A FAIRWAY EVER AGAIN with these new 2020 drivers.

Maybe I’m exaggerating a little, but that’s what golf commercials sound like to me.. Pretty ridiculous, huh?

Do you really think drivers improve each and every year? No. No, they do not.

With that being said, this article is going to be talking about the best drivers on the market for 2020. We can’t in our right minds only talk about the newest clubs, because they are simply a waste of money. However, we need to get more viewers to the site, and apparently writing articles every year about the hottest drivers helps.

So, we are also going to throw in better value alternatives that are less than half the price of the new releases. Let’s get to it!

Sure, the TaylorMade SIM is a great driver. Is it worth the price, though? No. Not in our opinion. Their marketing gimmick this year is all about aerodynamics. An aSyMeTrIc sOlE dEsIgN and a new iNeRtIa gEnErAtOr… shut up, TaylorMade. It’s just a good driver. It’s long, straight, and doesn’t sound/feel like trash at impact. I think I’ve made my point. I’m a natural salesman as you can probably tell.

What were you expecting? A driver to jack you off while you bomb drives down the middle while it feeds you grapes? Stop wasting your money. Don’t buy a driver that costs $500 that instantly drops in value by $300 the second you take the wrapper off and hit a skyball on the first tee.

Instead, pick a highly reviewed driver that was released at least 3 years ago. By that point, there are enough slightly used ones on the market, causing sellers to compete for price and not completely rip you off like when you buy new releases.

Better on a Budget: Callaway XR 16

The Callaway XR 16 is the driver that we recommend for golfers wanting a big stick that’s long, forgiving, and affordable. It was released about four years ago, and it was the most popular driver of the year. For 2020, there are tons of them on the market, allowing you to pick one up for around $200 in great condition.

Unfortunately, in the last four years, manufacturers have found all the loopholes to increase drives by 25 yards. Just kidding. It was a joke. The drivers are practically all the same but a different paint job. I was joking earlier. Did you read that part? I was lying. Just like how you lie to yourself that you hit your driver 280 yards. It’s really closer to 250, isn’t it?

For real, though. The Callaway XR 16 driver is hard to beat.

The Longest Driver of 2020: Callaway MAVRIK

DISTANCE. NEED MORE DISTANCE. FORGET EVERYTHING. OBTAIN DISTANCE. That’s the mindset of most golfers when picking out a driver. Nothing wrong with it. It’s just funny that people want distance so badly yet don’t train for a single second to actually increase their swing speed.

If you are one of those golfers, the Callaway MAVRIK is probably your best choice. It’s the longest driver of 2020 so far.

Its focus is distance. How can you tell? Well, there are like 5 speed gimmicks on Callaway’s website. Surely they all help increase your ball speed by at least .2 mph EACH, right? That’s 1 mph total, which is like 203 yards added to your drive.

Wait, I meant to type “2-3”. But 203 sounds a lot better. You’ll be more likely to use my links and buy the driver, right? Yeah, I’m gonna leave it. Buy away my friends, if you really just hate money. If you don’t hate money, go to the next section and buy a good value driver instead.

For those that actually care about money, but still want a bomb ass driver, check out the Callaway Razr Fit Xtreme driver. I currently game this driver, so I have a slight bias. But it’s an incredible driver, so I don’t actually care. It feels like butter at impact. It looks awesome. It flies further than any driver that I have tried. It’s the least spinny driver that I’ve played. Do I need to go on?

Oh yeah, let’s talk about price. I bought this drive like three years ago used for a HUNDRED DOLLARS. Yes, that was then, so it’s even cheaper now. You truly can’t go wrong with this one.

I personally guarantee (do not sue me, though… I have nothing I promise) that it is just as long as the new releases like the Callaway Mavrik.

The Most Forgiving Driver of 2020: Cobra King SpeedZone Xtreme

Oh, so you want to hit more fairways? Ha, dork. It’s all about the distance, bro! Come on.

“Dude, I averaged 315 yards off the tee today. I hit one fairway, but man did I bomb my drives!”

Good on your for wanting a forgiving driver. Hitting more fairways is definitely going to lower your scores more than an extra 5 yards would.

Cobra has come out with some awesome drivers in the past few years. Their 2020 release of the SpeedZone Xtreme is, in my opinion, their most forgiving driver they have ever released. Xtremely forgiving, you might say. Surely this one is worth the money, right? Haha, no. No no. Nope. Nah.

I’m not going to get into the fancy schmancy technological innovations of this club. Why? It’s boring to read, and it feels as fake as your aunt’s boobs (on your mom’s side of the family, obviously). It’s a forgiving club because the head is bigger and the center of gravity is low. That’s it. Read it again if you need to.

Like I mentioned earlier (as if you actually read it), Cobra has put out some great drivers recently. The Cobra King F7 model can be purchased for half the price of the SpeedZone models. The decision is basically this: is the benefit of the club being a new release worth the price increase of $250? No, the answer is no.

The F7 model is super forgiving. Even off center hits will fly relatively straight and far. It won’t turn you into a pro golfer, but it will make your mess ups more playable. That’s all you can ask for really.